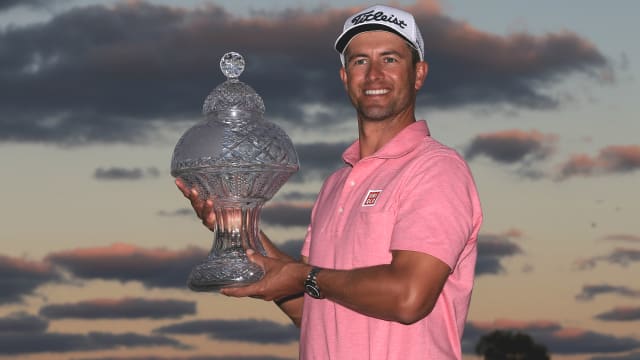 Back in form and back in the winners' circle, Adam Scott was understandably delighted after capturing The Honda Classic title.

Former world number one Scott held off Sergio Garcia by a stroke on Sunday for his first victory worldwide since taking out the Crowne Plaza Invitational at Colonial in 2014.

A runner-up at last week's Northern Trust Open, Scott continued his renewed accuracy with the putter after being forced to ditch the broomstick at the start of the year.

Scott ended the tournament in Palm Beach with an eagle, 17 birdies and 47 pars, while only dropping seven shots.

"It feels very good," said Scott, who carded a final-round 70 for a nine-under total. "It was nice to hit some quality shots coming in. Luckily for me, it was just enough.

"My game has come into a really good spot. We've worked really hard to get it there, made some nice progress in all areas, especially the greens. It paid off this week.

"I got off to a good start, made one at the first, that definitely relaxed me.

"Made a lot of good putts. Fortunately it was enough in the end."