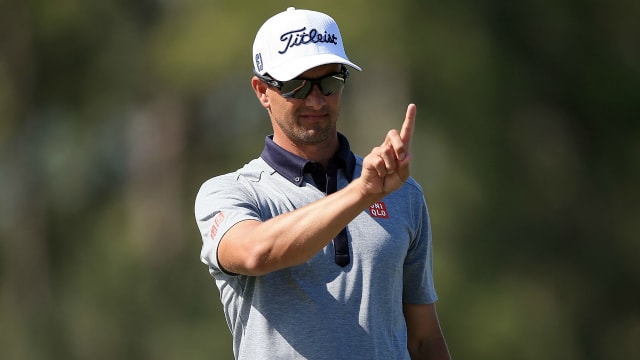 Adam Scott and Sergio Garcia are four shots clear of the chasing pack following an eventful round at The Honda Classic.

Scott continued his good form with a third-round 66, while Garcia carded a 67 as the pair improved to nine under through 54 holes in Palm Beach on Saturday.

In-form Scott, who finished tied for second at last week's Northern Trust Open, charged up the leaderboard with eight birdies during his third-consecutive round in the 60s, which included a flurry of four in a row, starting at the sixth hole on the front nine.

The Australian's only blemish came at the 15th, where he quadruple-bogeyed after twice shooting into the water, ending a run of 37 successive flawless holes.

As for Garcia, the Spaniard holed five birdies and two bogeys to join Scott in pole position ahead of Blayne Barber (69) heading into the final round the PGA National Golf Club.

Scott and Garcia benefited from Rickie Fowler's forgettable round.

Fowler - the overnight leader - did not register a birdie as he posted a four-over-par 74 to fall five strokes adrift of the leading duo.

However, Fowler's woes were nothing compared to Jimmy Walker's capitulation.

Walker started the day just a stroke behind Fowler but the American endured one of his worst professional rounds after carding a nine-over-par 79.

Walker's round left him two over the card and with a mountain to climb.