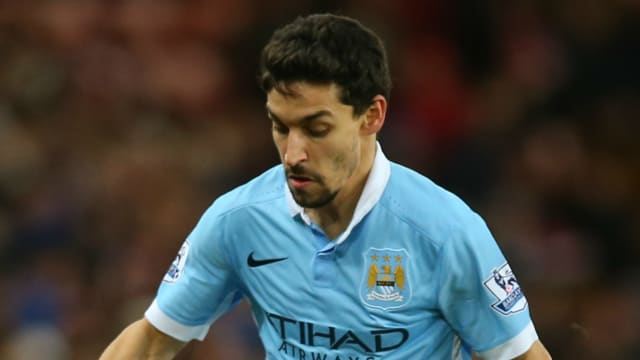 Manchester City winger Jesus Navas feels triumphing in the League Cup would be the perfect springboard to Premier League success, as evidenced by his side's double in 2013-14.

Manuel Pellegrini's men face Liverpool at Wembley in the final of the competition on Sunday, fresh from a morale-boosting 3-1 win at Dynamo Kiev on Wednesday that put them in full control of their Champions League last-16 tie.

Navas was part of the squad that beat Sunderland in the 2014 Cup final and then went on to win the league - the most successful season in City's history - and he has no doubt over the competition's positive effect.

"It would be fantastic to win this trophy," he told Sky Sports.

"We are involved in the Premier League title race and it would set us fair for the rest of the season.

"It is important to win as many [trophies] as we can. [In 2014] it almost relaxed us to go on and challenge for more that season. It was a confidence boost and gave us extra motivation to go on and win the title that year."

Navas scored in City's two-legged semi-final win over Everton and he believes the current squad is an improvement of the 2014 team, even though they are down in fourth place with just 12 matches still to play.

"Couple together the signings since that date with the players already here, I think we have strengthened," added the 30-year-old.

"If we can win this weekend it will be great. It will be an entertaining final, every game is different and we need to think of ourselves.

"Other important games follow, but first we must concentrate on this final. Our manager is focused, prepares well and is very demanding and will do it again for this final."