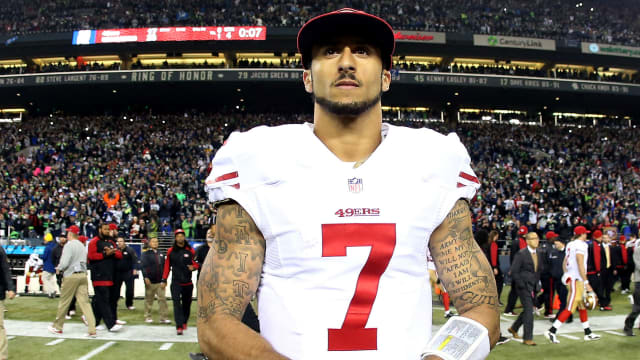 He was later placed on injured reserve with a shoulder injury that required offseason surgery.

The 28-year-old was replaced by former Jacksonville Jaguars starter Blaine Gabbert, who threw 10 touchdowns and seven interceptions in eight games, going 3-5 as the starter as the Niners finished 5-11.

"We've got two guys who have gone into games and proven they can play," Baalke said at the NFL Scouting Combine in Indianapolis on Wednesday.

"Colin has done some awful good things through his career - winning some big games for the San Francisco 49ers. We expect him to come back. The main focus right now is getting him healthy."

Should the Niners part with Kaepernick, he would have plenty of suitors throughout the league.

Kaepernick was San Francisco's second-round pick in 2011 and helped the 49ers reach the Super Bowl in his second season.

He became the full-time starter in 2013 after Alex Smith was traded and enjoyed another strong year that saw him throw for 3,197 yards with 21 touchdowns and eight interceptions with another four rushing scores.

However, Kaepernick has regressed in the last two campaigns as the 49ers have gone from title contenders to also-rans.

Baalke added Kaepernick's rehab "seems to be going very well" and that he is looking forward to getting him back on the field to work with new head coach Chip Kelly and his staff.

The 49ers will owe Kaepernick his full base salary of $11.9 million if he is on the roster April 1, and Baalke expects him to be there.

Baalke said: "The last time we talked to Colin, Colin was excited."