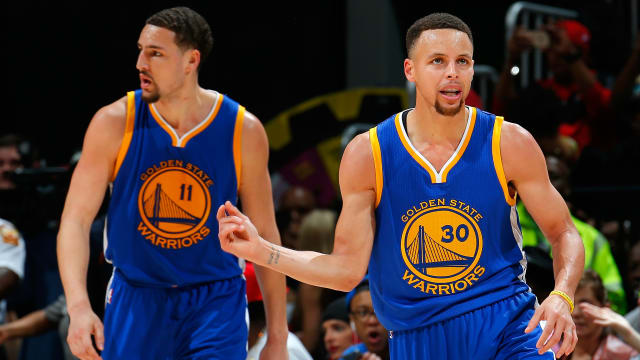 The Golden State Warriors became the fastest team in NBA history to reach 50 wins courtesy of a 102-92 win over the Atlanta Hawks.

The Hawks did not lie down, either, as they dominated the third quarter to ensure a tight finish, but Stephen Curry was on hand to score nine points in the final five minutes to steady the ship for the Warriors and seal the win.

Curry finished with 36 points, banking five three-pointers to increase his streak of games with at least one three-pointer to 126, just one behind the record held by Kyle Korver, and was well supported by Klay Thompson with 27.

The Warriors superstar was delighted to hit 50 wins for the season, but said it only served the team's ambition to finish as champions.

"Fifty wins is great, but we've got to keep plugging away and staying hungry, because nobody wants to talk about that in June," Curry said.

Al Horford top-scored for the Hawks with 23 points, completing his double-double with 16 rebounds.

The Cleveland Cavaliers could not capitalise on their impressive showing on Sunday against the Oklahoma City Thunder as they fell to the Detroit Pistons 96-88.

Reggie Jackson registered 23 points while Andre Drummond picked up a double-double with 16 points and 15 rebounds, while Kyrie Irving scored 30 points for Cavs.

Paul George's 31 points for the Indiana Pacers was not enough to help his team triumph over the Miami Heat, with the home side prevailing 101-93 as Goran Dragic scored 24 points for the victors.

The Toronto Raptors were big winners over the New York Knicks, posting a dominant 122-95 victory away from home, the Milwaukee Bucks edged the Los Angeles Lakers 108-101 and the Minnesota Timberwolves pipped the Boston Celtics 124-122.

Elsewhere, the Los Angeles Clippers enjoyed a dominant 124-84 win over the Phoenix Suns.