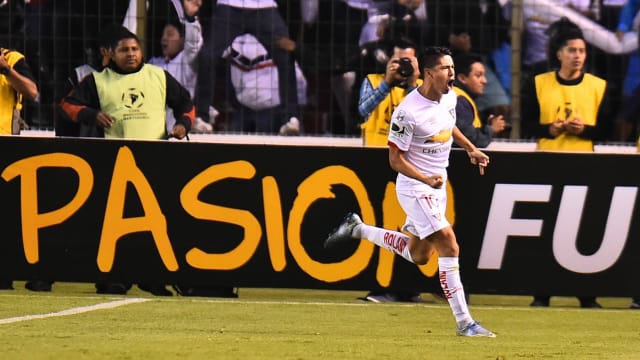 Diego Morales produced a brilliant individual performance to guide LDU Quito to a 2-0 win over San Lorenzo in the Copa Libertadores on Tuesday.

The match was goalless at half-time in the Ecuadorian capital before a piece of magic from Morales saw the hosts take the lead five minutes into the second half.

Morales received the ball on the left, beating three men on his way into the box before cutting onto his right foot and unleashing an unstoppable strike past San Lorenzo goalkeeper Sebastian Torrico.

Quito continued to dominate for most of the second period before another moment of brilliance from Morales in stoppage-time wrapped up the result against their Argentinian opponents, putting the side atop Group 6.

It was not a great night for Argentinian sides with 10-man Huracan suffering a 2-0 loss at home to Atletico Nacional.

Marlos Moreno silenced the Huracan supporters on the stroke of half-time with a thunderous strike, beating keeper Marcos Diaz at his near post.

The 19-year-old Moreno then turned provider for Orlando Berrio, who secured victory and top spot in Group 4 for the Colombian outfit by walking the ball into an empty net in the 82nd minute, after Huracan's Federico Mancinelli was sent off 10 minutes earlier.