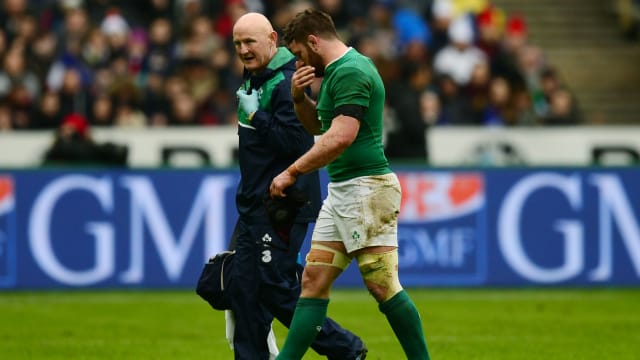 Ireland are set to be without Sean O'Brien, Dave Kearney and Mike McCarthy for the remainder of the Six Nations, but an injury sustained by Jonny Sexton on Friday is not serious.

O'Brien suffered a hamstring injury during the defeat against France last weekend, while Kearney damaged his shoulder in the bruising encounter in Paris.

Ireland coach Joe Schmidt revealed on Friday that the duo are not expected to play any further part in Ireland's title defence.

"Sean is likely to miss the rest of the Six Nations as is Dave Kearney but we'll continue to monitor them," Schmidt said.

McCarthy's season appears to be over as a result of a clash of heads with team-mate Jack McGrath at Stade de France on Saturday.

Schmidt added: "[McCarthy] has seen a specialist now and he is going to effectively recondition himself, freshen himself up and to kick-start next season now.

"That's the latest word, maybe not the definitive word, but I think for him it's an opportunity to freshen himself up a bit and that will give him a good entry point to next season."

There were also concerns over Sexton when he sustained an injury in training, but Schmidt allayed fears over the inspirational fly-half ahead of the trip to Twickenham to face England next weekend.

The New Zealander added: "He just rolled his ankle. He could have trained on, but we sent him to the side.

"He rolled it, then did all the individual stuff in the unit split, but in the end most of what we were going to do is broken play work, so we didn't really need him in there and we had 18 players from the 20s.

"Johnny will be fit to play on Monday. The problem with rolling your ankle is if you do train on it you just get more inflammation. The sooner you stop the inflammation, in 48 hours you're up and running.

"I wouldn't be concerned at all. The medics came and said to me 'do you want him to carry on?' I said 'no, leave him out'."