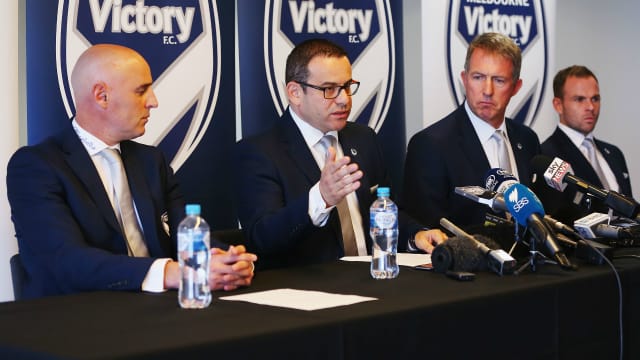 Melbourne Victory Chairman Anthony Di Pietro has called on the club and their fans to unite as one to rid a "marginal element" of misbehaving fans.

Victory were hit with a $50,000 AUD fine and a suspended three-point penalty by Football Federation Australia (FFA), who found the A-League champions guilty of bringing the game into disrepute during Saturday's flare-fuelled Melbourne derby.

Di Pietro and Victory showed a united front as they faced the media on Wednesday, with the former telling reporters: "There is a marginal element that are behaving in this way. It's about all of us uniting to get rid of this element.

"We ask every Melbourne Victory fan to unite. Our message is clear and simple - no more flares, no more anti-social behaviour.

"Enough is enough. We ask the true Melbourne Victory fans to stand with us and eradicate anti-social behaviour. The true fans want this to come to an end."

Victory were hit with the same penalty that was handed down to rivals Western Sydney Wanderers last week.

"We came to a decision very quickly not to appeal. We felt it was important to move quickly to resolve this matter before Friday [game against Adelaide United]," he said.

"There will be significantly heightened protocols to enter the stadium on Friday night for the benefit of everyone.

"Everyone has to be involved in the solution. If it takes fans extra time to enter the venue, it's a small price to pay."

Victory coach Kevin Muscat said he has been left feeling "deflated" over the whole saga.

"The live atmosphere at a Melbourne Victory game is unrivalled, but anti-social behaviour must stop," he said.

"The players have almost become reliant on the amazing support. I plead with everyone to eliminate the bad behaviour."

Victory midfielder Leigh Broxham spoke on behalf of the squad and said: "As a playing group, we now have three points hanging over our heads.

"We work ever so hard and now those three points are in jeopardy."