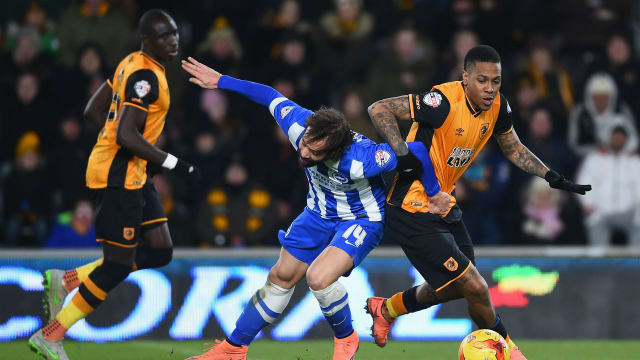 Hull City and Brighton and Hove Albion cancelled each other out as two of the Championship's promotion-chasing sides played out a frustrating 0-0 draw at the KC Stadium.

Top-of-the-table Hull were looking to go four points clear of second-placed Middlesbrough, but they could not take full advantage of Boro's own stalemate at Leeds United 24 hours previously.

Abel Hernandez's overhead kick brought a smart stop out of David Stockdale, who tipped Sam Clucas' late drive onto the crossbar as the hosts pushed for victory late on, but centre-back Lewis Dunk dinked over the woodwork after a sweeping run through midfield to keep Steve Bruce's men honest.

Hull went two points clear at the top as a result, while Brighton move up to third.

Fulham and Blackburn Rovers, 18th and 19th in the division pre-match, met at Ewood Park and it was the home team that picked up a vital 3-0 win on Tuesday.

Goals from Ben Marshall, Shane Duffy and Danny Graham sent Rovers above their opponents in the table and eight points clear of the relegation zone.

Elsewhere in the Football League, Accrington Stanley failed to capitalise on a gilt-edged chance to close on the League Two automatic promotion places as they drew 1-1 at home to Carlisle United.

Carlisle striker Jabo Ibehre was sent off in the first minute of the match for a flailing arm but, incredibly, the Cumbrian side took the lead through Hallam Hope.

It looked a tough ask for Accrington when Adam Buxton was given his marching orders in the 54th minute, but Terry Gornell equalised just four minutes later to ensure a share of the spoils.

It ought to have been more for Accrington, but they did close to within six points of third-placed Oxford United, who went down 1-0 at home to Northampton Town, the Cobblers extending their lead at the top to eight points.

York City scrambled out of the bottom three with a 2-0 win over Exeter City and Notts County saw off Hartlepool United 3-2 in a topsy-turvy contest.

In League One, Chesterfield rescued a late 1-1 draw at Colchester United to edge out of the drop zone, while struggling Blackpool and Oldham Athletic drew 0-0.

Bradford City closed on the top six by beating seventh-placed Southend United 2-0, leapfrogging Sheffield United, who lost 1-0 at Bury, while Scunthorpe United won 2-0 at Millwall and Rochdale played out a 2-2 draw with Crewe Alexandra.