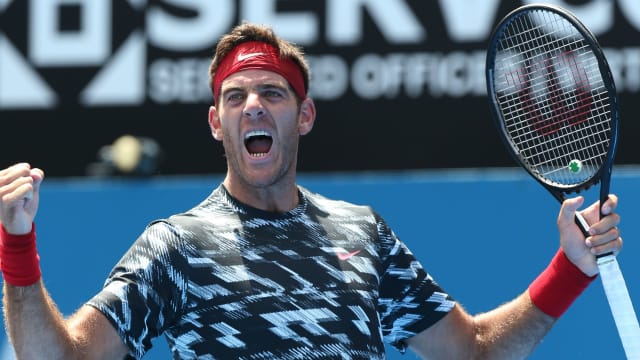 Del Potro - now 1,045 in the ATP rankings - has been hampered by ongoing wrist problems, which limited the 2009 US Open champion to just two tournaments last year.

But the wildcard, who last appeared at Delray Beach in 2011, was a class above as he saw off American Kudla 6-1 6-4 in the opening round on Tuesday.

Del Potro broke three times and did not face a break point in an hour on court.

While the Argentinian showed signs of promise, top seeds Kevin Anderson and Bernard Tomic made swift exits from the ATP 250 event in Florida.

Top-seeded South African and 2012 champion Anderson had just lost the first set against Austin Krajicek 7-6 (7-3) when he retired hurt due to an injured right shoulder.

''This is just a tough start to the year,'' said Anderson.

"I've been training really hard to come back [from the knee injury] and I guess I just overcompensated with my shoulder.''

Tomic - a top-10 hopeful this year - headlined an exodus of Aussies at Delray Beach on Tuesday, after John Millman, Sam Groth and Matt Ebden also lost.

Elsewhere, seventh seed Donald Young advanced to the second round after Mikhail Kukushkin retired when trailing 7-6 (7-3) 3-0.