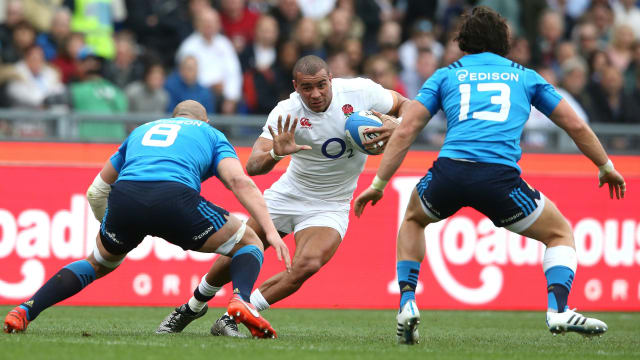 Former England international Jason Robinson thinks it is too soon for Eddie Jones' side to be thinking of a Grand Slam ahead of crucial Six Nations fixtures against Ireland and Wales.

England followed up a hard-fought 15-9 win over Scotland in their opening match by comfortably beating Italy 40-9 in Rome on Sunday.

Jones' team are one of just two sides still capable of achieving the Grand Slam, but Robinson - a World Cup winner in 2003 - is unsure about their credentials.

With a tough match against winless defending champions Ireland at Twickenham on February 27 followed by the visit of Wales on March 12, the 41-year-old's thinks England's challenge is just beginning.

"I don't think [England should be thinking about the Grand Slam] because they have their toughest two games coming up and Ireland will be looking to really turn up the heat at Twickenham," Robinson wrote in his Evening Standard column.

"No disrespect to Scotland and Italy but England must now step up a gear and I wonder if we have the firepower in our backline to handle what Ireland and Wales will throw at us in the next two games.

"It will be interesting to see how we adapt our game against more physical opponents and the last time we played Ireland they tore us apart with their kicking game.

"England will have to combine the dogged way they competed against Scotland and marry that with the second-half back play that produced five tries against Italy yesterday.

"The coaches want England to be more ferocious in defence, putting people under real pressure, but they will now come up against fly-half Johnny Sexton, who is a very smart player and his kicking game will be key if Ireland are to register that first win."

Robinson reserved special praise for Jonathan Joseph following his trio of tries at the Stadio Olimpico, suggesting it is evidence of England's attacking improvement from an attritional opening game.

"The hat-trick for Jonathan Joseph was very important for him because we didn't see a lot of the centre in attack in the win over Scotland at Murrayfield," he added.

"The interception he got was a bit of a gift from the Italians and the second came from Danny Care's good vision to put the grubber kick through for him to collect and score under the posts.

"It showed that England are mixing things up in attack."