O'Brien out of England game, Kearney in doubt 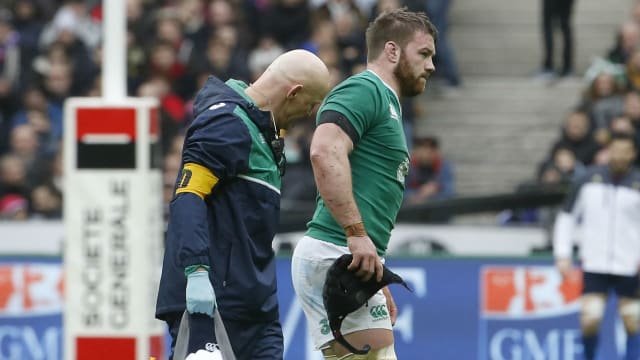 Sean O'Brien is out of contention and Dave Kearney is in doubt for Ireland's Six Nations match against England as the champions' injury worries mount.

O'Brien was struggling with a hamstring problem ahead of the opener against Wales and suffered a tear in the 10-9 loss to France on Saturday.

Head coach Joe Schimdt confirmed the flanker will play no part as the holders go in search of a first win of the 2016 competition against England at Twickenham on February 27.

Ireland also have concerns over the fitness of Kearney, Mike McCarthy and Jared Payne.

"Sean O'Brien unfortunately has a grade two hamstring tear so that will make him unavailable for the England game, and we'll see how he tracks beyond that," Schmidt told Irish Rugby TV.

"Dave Kearney has got an AC [acromioclavicular] joint injury and a very sore shoulder and neck, and he's also very likely to miss the England game as a result of that.

"Mike McCarthy suffered a concussion and he will follow the return-to-play protocols, but we'll also get him to see a specialist just because of the nature of the impact.

"Jared Payne has got a grade one hamstring strain that he actually did in the first half, we already had to put Fergus McFadden on when Dave Kearney got taken out and on the basis of that he said he'd go as long as he could.

"He managed to get his way through that but he certainly won't train this week and we'll have to monitor in the lead up to the England game."

However, Schmidt allayed concerns about Jonathan Sexton, who was hit by a shoulder charge from Yoann Maestri during the first half in Paris.

"Jonathan Sexton, again his neck and shoulder, it's more of a whiplash injury and he is certainly feeling a lot better 48 hours post-game."