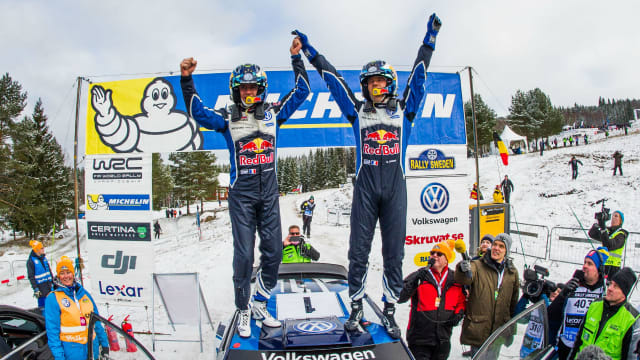 Sebastien Ogier claimed his third Rally Sweden victory and second in as many years as he successfully navigated Sunday's solitary power stage.

The defending champion led the shortened rally from start to finish and had extended his 17-second advantage to nearly half a minute by the end.

Ogier was fastest on the final 15.87 kilometres of snow and ice as he stopped the clock after seven minutes 42.7 seconds, three clear of Volkswagen team-mate Andreas Mikkelsen, who finished fourth overall.

Hayden Paddon - who had given Ogier a scare on Saturday with a fine driving performance - was unable to compete with the Frenchman, though, his day spoiled by a broken radiator on his Hyundai.

Paddon was able to seal second place behind the dominant VW driver, with Mads Ostberg completing the podium places in his M-Sport Ford.

Victory maintains Ogier's 100 per cent record at the start of WRC 2016, the 32-year-old having won the opener in Monte Carlo, and sees him move 22 points clear in the drivers' championship.

"It's been an amazing weekend," said Ogier. "I love the rally here in Sweden.

"The weather came and the organisers did an incredible job. Two wins from two rallies, it's a great start to the year. Yesterday I took lots of risks I had a lot of luck."