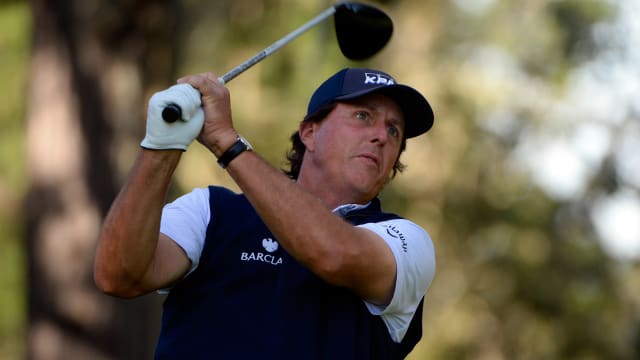 Phil Mickelson moved into the lead at the AT&T Pebble Beach Pro-Am on Saturday with an impressive six-under par 66 in the third round.

The American shot three-straight birdies on his back nine and having made three more on his front nine in a bogey-free round to claim the lead at 16 under going into the final day.

Mickelson will be going for his 43rd career PGA Tour win and fifth at Pebble Beach.

The 45-year-old holds a two-stroke lead over Japan's Hiroshi Iwata, who finished the day three under.

Iwata managed to match Mickelson with six birdies but he hit three bogeys during the round.

Tied for third place is Freddie Jacobson and Sung Kang, who shot three and two under respectively.

Jacobson followed Iwata's path with six birdies and three bogeys, while Kang could not match his second-round heroics after only sinking three birdies to fall three strokes behind the lead.

Sweden's Jonas Blixt put in a great performance with five under, while he is joined tied for fifth with American Roberto Castro.

Justin Rose fell down five places after scoring even 72, while Jason Day finished at four under to move up to equal eighth.

Jordan Spieth fell 18 placed to equal 54th after carding two over, while defending champion Brandt Snedeker is sitting on two under heading into the final round with plenty of work to do to catch the leading pack.