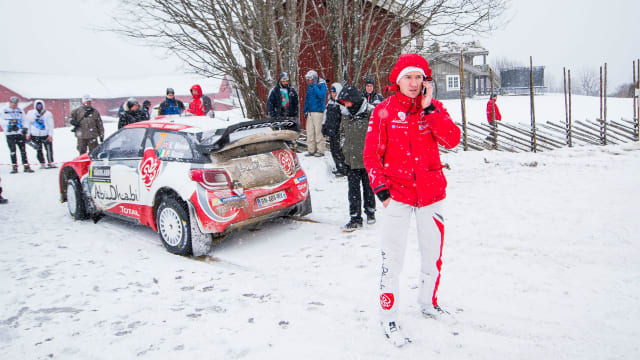 Kris Meeke and Jari-Matti Latvala were forced to retire on day one of the shortened Rally Sweden, as Volkswagen's Sebastien Ogier moved into pole position for yet another victory.

Reigning world champion Ogier had to overcome problems of his own, as he first hit a tree on the third stage to damage his front wing and then overshot a junction to lose more time later in the day.

However, those scares paled in comparison to the issues faced by many of Ogier's rivals and the Frenchman ended Friday holding a 26.9-second lead over Hayden Paddon (Hyundai), with Ford's Mads Ostberg a further 6.8 seconds back.

Organisers had been forced to cancel a number of stages earlier this week due to mild temperatures, but a change in conditions brought heavy snow on Friday and made life tough for competitors.

Citroen driver Meeke saw his rally come to an end when he hit a stone buried in the road for the second race in succession.

Latvala, meanwhile, retired with broken suspension on the day's final stage - having spent most of the day restricted to two-wheel drive in his Volkswagen.

"Sometimes life is hard," said Neuville. "I feel like I'm doing a two-wheel drive championship in the last few races. We are getting used to it."