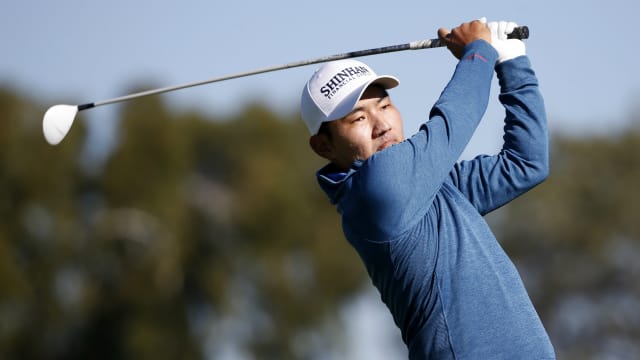 Sung Kang put on a show as he set a tournament course record at Monterey Peninsula Country Club by shooting a superb 11-under-par 60 to rocket into the joint lead at the AT&T Pebble Beach Pro-Am.

Kang managed par in his first round but was in amazing form as he put on a masterclass on Friday, starting on the back nine and carding six under courtesy of four birdies and an eagle on the 16th hole.

The South Korean backed it up with another five birdies on the front nine to complete a bogey-free round and comfortably card the round's best score.

He shares the lead with Japan's Hiroshi Iwata, who is also 11 under, after shooting six-under par on Pebble Beach Golf Links to score his second-straight 66.

Iwata shot a superb six under on the front nine, including an eagle on the sixth, but he found it tougher on the back nine as he levelled out with two birdies and two bogeys.

Four-time winner Phil Mickelson was also in good form as he shot six under to take his overall score to 10 under, despite two bogeys on the back nine of the Monterey Peninsula course that Kang had breezed through so well.

Mickelson carded an eagle on the 10th hole but bogeys on the 12th and 18th holes cost him the lead at the end of the round.

"The wind was blowing a touch, it's a great golf course to accommodate wind because the fairways are wide enough and the greens are big enough, but you still have to hit good shots to make birdies," Mickelson said.

Mickelson is joined on 10 under by Freddie Jacobson and Chez Reavie, who shot three and two under respectively.

Defending champion and two-time winner Brandt Snedeker is on par after shooting a two-over par 71.