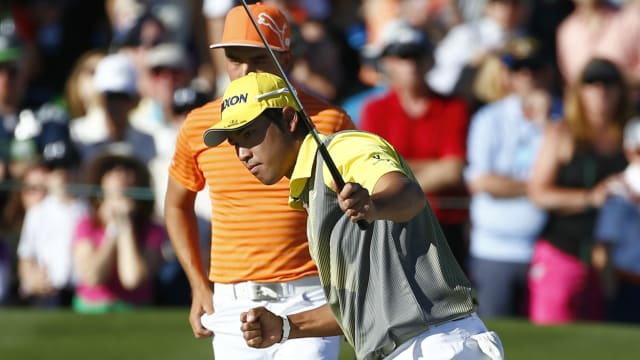 After watching Fowler bogey the par-four 17th hole, last year's runner-up Matsuyama stepped up and two-putted for birdie and the victory at TPC Scottsdale.

The nail-biting win, closed out just as Super Bowl 50 between the Carolina Panthers and the Denver Broncos got underway in San Francisco, saw Japan's Matsuyama claim his second PGA Tour crown.

After finishing level at 14 under after identical fourth rounds of 67, Matsuyama and Fowler could not be separated early in the play-off.

Fowler chipped within a foot of the 18th hole for par, while Matsuyama's long attempt to win fell short as a second hole beckoned.

Both players nailed birdies to force a third play-off hole at the 10th, where Matsuyama and Fowler managed pars.

But the fourth additional hole saw Fowler crack first as Matsuyama sealed his first title since 2014.

Danny Lee of New Zealand dropped to 11 under after he shot a two-over-par 73, a stroke ahead of Boo Weekley (70).

Phil Mickelson (71) was a shot clear of two-time major champion Bubba Watson (66) at eight under.