Leicester remind Pellegrini of his Villarreal 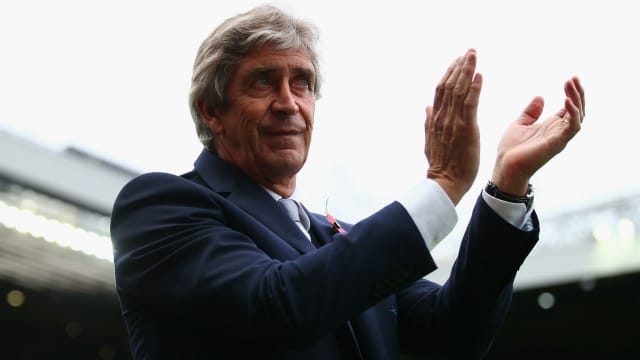 Manchester City manager Manuel Pellegrini has likened Leicester City's shock bid for the Premier League title to his own exploits at Villarreal.

Claudio Ranieri's Leicester travel to the Etihad Stadium on Saturday as league leaders, three points clear of their opponents.

Pellegrini's City still retain an interest in four competitions, with the opportunity of giving the 62-year-old a triumphant send-off before Pep Guardiola takes up the reins in Manchester from next season.

Leicester's sole focus is on the Premier League and their favourable injury record is a leveller to the Premier League's big spenders according to the Chilean tactician, who famously led an unfancied Villarreal side to the semi-finals of the Champions League during his time in La Liga.

"Leicester have a very good squad with not many players injured," Pellegrini told a news conference.

"They play with the same team every week. They have fewer games than other teams but I think the merit of the squad is very important.

"In football, not only finances make the difference - of course you must buy players to win the title but every year there's a surprise.

"Leicester are all thinking and doing the same thing at the right moment. That can equalise the finances.

"I don't know if you can compare but what we did at Villarreal was similar. We reached the semi-finals of the Champions League and finished second in the league.

"Maybe Leicester are not a team with a lot of possession but they defend very well with a lot of concentration and they counter-attack with a lot of speed. If you have the commitment of the players as a manager, that's the most important thing."

Pellegrini will be without winger Jesus Navas, who he confirmed will face a minimum of three weeks on the sidelines due to a leg-muscle injury sustained during Tuesday's 1-0 win at Sunderland.

Vincent Kompany is set to resume full training next week following persistent struggles with a calf injury, but his manager does not believe the City captain will return to the fold on the back of a decisive moment in the title race.

"It's not the biggest game of the season so far- we can win or lose this game and the Premier League will not end here," Pellegrini added.

"We have 39 more points to fight for. You cannot think you're champion if you win and if you lose, there are lots more points.

"It's a good game, a big game but not decisive."