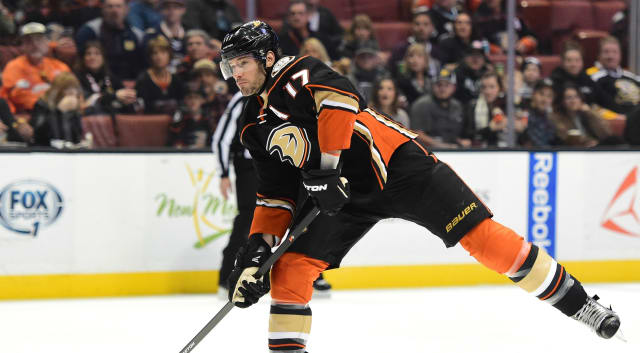 The Anaheim Ducks ensured the Detroit Red Wings' stop-start season continued to falter on Saturday with a tight 4-3 win.

Ryan Kesler's 10th goal of the season proved the clincher for the Ducks.

After winning four-straight matches at the start of January, the Red Wings have won just two of their last six, with three of their four losses coming at just a margin of one goal.

Darren Helm had put the Red Wings 1-0 up, but they were 2-1 down at the first intermission following goals from Kesler and Corey Perry.

Tomas Jurco levelled the scores in the second period, but a second from Perry - his 19th of the season - and Kesler ensured Danny Dekeyser's late goal for Detroit was a mere consolation.

Elsewhere, the Florida Panthers continued to rebuild their confidence with a second-straight win, beating the Tampa Bay Lightning 5-2.

The Lightning shut out the Panthers in the first period but the floodgates opened in the second as Florida hammered home four goals as forwards Jonathan Huberday and Nick Bjugstad each scored a goal and an assist.

The win means the Panthers have smashed eight goals past the 2015 Stanley Cup finalists over their last two games, having defeated the Chicago Blackhawks 4-0 on Friday.

The Pittsburgh Penguins won a thriller against the Vancouver Canucks with a huge four-goal effort in the final period to seal a 5-4 win.

An Evgeni Malkin hat-trick, including two in the third, was crucial for the Penguins, who won courtesy of Sydney Crosby's 16th goal of the season.

The goals were flying in when the Minnesota Wild travelled to the San Jose Sharks, with the home side prevailing 4-3, while the Boston Bruins beat the Columbus Blue Jackets 3-2 via a shootout in another entertaining contest.

The Montreal Canadiens also prevailed in a shootout, as they came away with a 3-2 victory over the Toronto Maple Leafs.

The Arizona Cardinals beat the Los Angeles Kings 3-2, as the Nashville Predators got the better of the Edmonton Oilers 4-1.