Murray leads the charge as Hewitt bows out 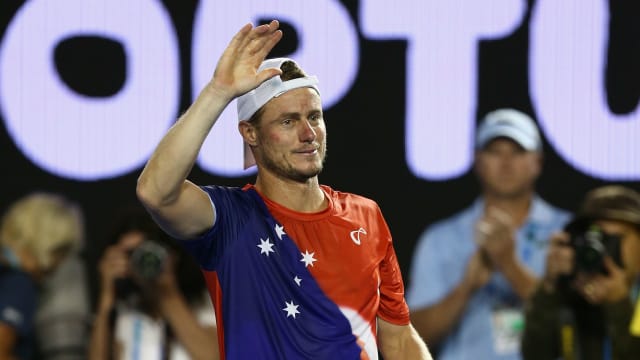 Andy Murray led another good day for the seeds in the men's draw at the Australian Open, although Jack Sock and Jeremy Chardy were late casualties in the second round.

Murray was not troubled by Sam Groth on Rod Lever Arena as he cruised to a 6-0 6-4 6-1 victory, the second seed winning the first nine games of the match as his opponent struggled on the show court.

Eleven of the 13 seeds in action progressed, with David Ferrer the man to bring the curtain down on Lleyton Hewitt's illustrious career with a straight-sets win.

Murray hit 35 winners as he booked a third-round place, the Briton taking full advantage as Groth made 32 unforced errors.

Milos Raonic looked in impressive form as he came through against Tommy Robredo without dropping a set, while Fernando Verdasco failed to build on his earlier win over Rafael Nadal as he was dumped out by Dudi Sela.

Fourth seed Stan Wawrinka's backhand was brimming with confidence during his triumph over Radek Stepanek, and although Hewitt went out the home crowd were given some late cheer as James Millman won a five-set thriller against Gilles Muller.

While the top seeds had no problems progressing, the same could not be said for Sock and Chardy, both men falling in straight sets to Lukas Rosol and Andrey Kuznetsov respectively.

Sock's 21 aces were not enough as he lost the opening two sets in tie-breaks, before Rosol charged through the third.

Andy Murray has never lost a tour-level match to an Australian player in his career. After his win over Groth, the four-time Australian Open finalist is 17-0 against Aussie opposition.

Feliciano Lopez's battling victory over Guido Pella is the first time a five-set match has featured four tie-breaks at the Australian Open since 1993.

Raonic has served 32 games in two rounds of this year's tournament. He has won all 32, and only faced four break points - all against Robredo.

A Hewitt themed round-up was led by Coco Vandeweghe as the Australian battled to stay in tournament. Sadly Ferrer did not read the script: "Is there anyone that doesn't want @lleytonhewitt to come back @AustralianOpen #rusty #5thsetmode"

"We will miss you @lleytonhewitt What a champion! What a #fighter! Its a very special night," former Wimbledon champion Marion Bartoli leads the tributes to the 34-year-old.

Murray reveals his pre-game boost against Groth: "I was standing right next to him in the locker room and he said to someone 'this is my first time on Rod Laver. I've never even hit on it before'. And I thought 'yeah, great. That's good. That's good for me'."

"I came out, gave it everything I had, like always, I left nothing in the locker room, that's something I can be proud of. I always gave 100 per cent," Hewitt bows out after 20 successive Australian Open appearances.

Ferrer praises Hewitt after his victory: "Lleyton Hewitt is one of the best players in history. He was one of my idols, I have a signed shirt of his in my house. It is the only one of a tennis player that I have."

Wawrinka reveals his delight at cruising past Stepanek and onto a match with Rosol: "I'm happy with the way I'm playing. It was a great atmosphere. The crowd here always supports me. It's only the second round, so I need to rise and be ready for the next one."

Portugal's Joao Sousa is Murray's next opponent - a player he has beaten on all six previous meetings - while Ferrer's reward for beating Hewitt is a third-round match with the big-serving Steve Johnson.

Raonic will look to maintain his stunning start to the grand slam against Viktor Troicki, and there will be an all-French clash between Gael Monfils and Stephane Robert.

Before those matches the third round begins on Friday, with Novak Djokovic and Roger Federer back in action.