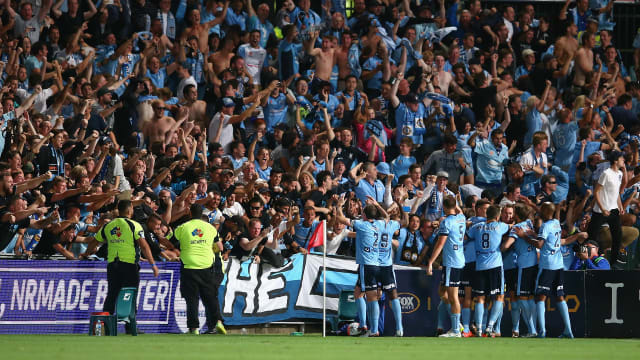 But Smeltz had the final say, lashing home an unstoppable volley in the final minute to stretch the Sky Blues' unbeaten streak in the derby to six matches.

The win also draws Sydney level on 27 points with the Wanderers, who have now lost two A-League matches in a row for the first time this season.

Adelaide United proved to be too strong for Central Coast Mariners at the Coopers Stadium as they recorded a 3-1 win.

Craig Goodwin gifted the home side the lead at the hour mark, but Mariners levelled the scoring again shortly after through Fabio Ferreira.

Perth Glory frustrated Melbourne City to hold on to a 2-2 draw.

Erik Paartalu opened the scoring for Melbourne on the half-hour mark, only for Diego Castro to net the equaliser in first-half stoppage time.

Aaron Mooy restored the away side's lead shortly after the break, but it was not meant to be for John van 't Schip's men as Chris Harold made it 2-2 after 60 minutes of play.

Perth were reduced to 10 men shortly after when Jacob Collard received his second booking, but the hosts held firm to record a hard-fought draw.