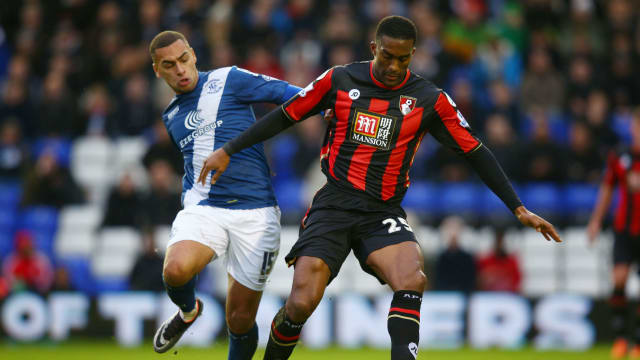 Glenn Murray punished James Vaughan for a missed penalty when he struck late to earn AFC Bournemouth a 2-1 win against Birmingham City in the FA Cup third round at St Andrew's on Saturday.

Murray was sent on by manager Eddie Howe in the 78th minute and poked home seven minutes later after Birmingham goalkeeper Adam Legzdins spilled the ball inside the box, piling the misery on Vaughan after he failed to score from the penalty spot on the hour-mark with the scores level.

Gary Rowett's side began impressively and, after surviving a scare in the 23rd minute when Yann Kermorgant rattled the crossbar with his header, opened the scoring through Michael Morrison five minutes before the interval.

Lee Tomlin restored parity with a 44th-minute penalty - his first goal for Bournemouth - before Birmingham were awarded a spot-kick of their own on the hour-mark.

But Vaughan - who made his loan move from Huddersfield Town permanent in the week - blazed it over, while Jacques Maghoma hit the post with 15 minutes remaining.

Bournemouth then stunned the hosts late on as substitute Murray dealt the knockout blow, finding the back of the net with an opportunistic strike to book a place into the draw for the fourth round.

Birmingham started positively and had a chance to open the scoring inside the opening minute, but Andrew Shinnie fired over from the centre of the box after Viv Solomon-Otabor's cutback.

The Championship side maintained their momentum in the early exchanges but Bournemouth gradually edged their way into the game and almost took the lead midway through the half.

Marc Pugh stood a cross up at the back post which Kermorgant headed against the bar before sending his second attempt straight at Legzdins.

The Premier League team began to enjoy a greater share of possession with Birmingham sloppy on the ball, but the visitors lost Tokelo Rantie to injury in the 39th minute - Matt Ritchie replacing him.

Bournemouth's problems mounted seconds later when Rowett's team took the lead against the run of play, Morrison connecting with David Cotterill's free-kick from the right and powering a header into the back of the net.

However, Birmingham's advantage did not last long as referee Mike Jones pointed to the spot after O'Kane was nudged over by Grounds.

Tomlin ensured Howe's side went into the break level, sending the penalty straight down the middle with 44 minutes played.

Rowett replaced Neal Eardley and Cotterill with Shane Lowry and Maghoma for the second half but Bournemouth remained in charge.

Birmingham had a great chance to regain the lead on the hour-mark when they were awarded a penalty after O'Kane was judged to have fouled Maikel Kieftenbeld, but Vaughan smashed the spot-kick over the top.

Maghoma came close to sparing Vaughan's blushes 15 minutes from time but his strike from the centre of the box struck the upright.

Birmingham's inability to convert ended up costing them their place in the competition as Murray pounced in the 85th minute, scrambling home after Birmingham failed to deal with Steve Cook's cross.