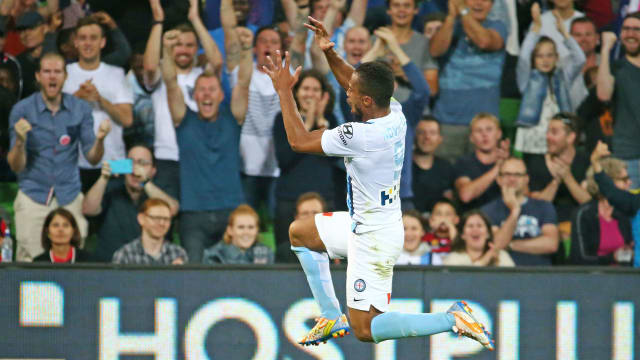 Harry Novillo was Melbourne City's hero as he completed a brace to seal a thrilling 3-2 A-League win over Western Sydney Wanderers.

Novillo broke the deadlock with a superb eighth-minute free-kick and Bruno Fornaroli curled home to crown a wonderful counter-attack in the 24th minute.

Joint-leaders Wanderers, who entered the match aiming to go top of the table with leaders Brisbane Roar in action at Wellington Phoenix on Sunday, were back in the contest when Mitch Nichols' long-range strike squirmed through home goalkeeper Thomas Sorensen.

The visitors pulled level after an hour as Aaron Hughes diverted Dario Vidosic's cross into his own net and heroics were then required from Sorensen to keep the match all square.

But Novillo had the final word, rifling home brilliantly from outside the box in the 85th minute to move City to within three points of the summit.

John van't Schip's team are level on points with Sydney FC, who were 2-0 winners over Newcastle Jets as Ali Abbas made a memorable return from his injury nightmare.

Sydney led through Filip Holokso's first-half opener when Abbas came off the bench following almost 14 months on the sidelines with a knee problem.

Second-bottom Perth Glory remain a point behind Newcastle having passed up the opportunity to leapfrog Adelaide United, suffering a 3-1 home loss.

Perth led through Tarek Elrich's own goal in the sixth minute but Sergio Cirio completed a slick team move to level in the 27th minute.

The Glory's task became considerably steeper when Alex Grant was sent off for a professional foul on Craig Goodwin in first-half stoppage time, and they had no answer to Marcelo Carrusca's classy second and Goodwin's late third.