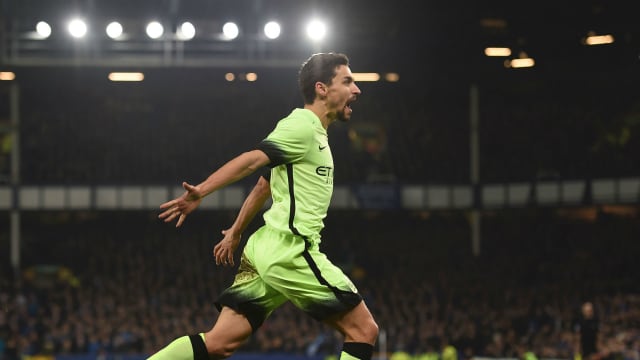 Jesus Navas has credited manager Manuel Pellegrini for helping to end his long wait for a Manchester City goal in Wednesday's League Cup loss to Everton.

Spain winger Navas cancelled out Ramiro Funes Mori's opener at Goodison Park in the second half, only for Romelu Lukaku to win the match for Everton two minutes later to give Roberto Martinez's men a 2-1 semi-final first-leg lead.

While City may have lost, for Navas there was a sense of relief as he ended a 16-month wait for a goal with his last strike coming in a 7-0 demolition of Sheffield Wednesday in the League Cup in September 2014.

And Navas showed his gratitude to Pellegrini after ending his drought in front of goal.

"I always try to create a lot of chances, but maybe this season I have been unlucky when it came to scoring goals," he told the Manchester Evening News.

"But this time I managed to score a goal which helps my confidence. Manuel has been helping me with this and I am grateful to him for the fact I scored."

Navas has had chances to net before his goal at Goodison, with notable misses against Crystal Palace, AFC Bournemouth and Arsenal to his name this season.

But the winger insists the missed opportunities were not playing on his mind.

"At the start of every game you are focused on the game you are playing, so you don't look back at previous games," he added. "It was great news that I scored - it helps me and gives me a boost in my confidence."