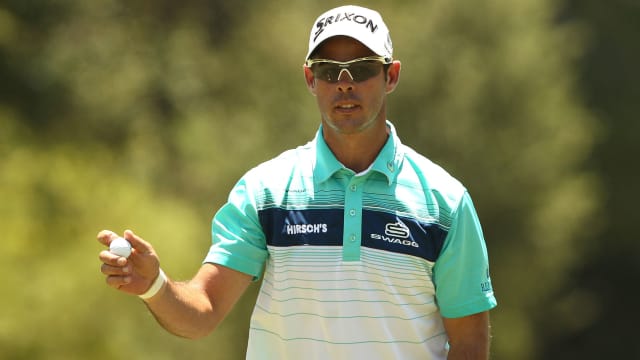 Jaco Van Zyl raised hopes that he can win a first European Tour title on home soil by taking a one-shot lead on an opening day of the South African Open Championship which was curtailed due to the weather.

The 36-year-old has won 13 titles on the Sunshine Tour, but a European Tour crown has so far been elusive as he has finished as runner-up on four occasions.

Van Zyl was among the favourites before he teed off at the Glendower Golf Club on Thursday and lived up to his billing by carding a seven-under first round of 65 in Ekurhuleni.

All of the top four and six of the top 10 on the leaderboard hail from South Africa, with Shaun Norris second after starting with a 66 in his homeland and compatriots Keith Horne and Jbe Kruger two shots off the lead.

Two-time winner Retief Goosen is tied for fifth following a four-under 68, with double-bogeys at the third and 12th holes scuppering his chances of topping the leaderboard.

Scotland's David Drysdale was four under after 15 holes when play was suspended due to the threat of lightning and officials revealed that the action will start at 6.30am local time on Friday to enable first rounds to be finished.

Van Zyl started with a birdie on the 10th and picked up further shots at 13, 15 and 16 to hit the turn in 32. He conjured up an eagle three at the second to take a two-shot lead on seven under, with a bogey on the seventh cancelled out by a birdie on the next to ensure he set the pace.

Defending champion Andy Sullivan looks unlikely to retain his title after starting with a three-over 75, while tournament host Ernie Els will head into his second round on one over after suffering the yips as he end his round by three-putting the ninth.

Nicolas Colsaerts and Richard Finch retired due to respective shoulder and Achilles injuries during the first round, while Paul Dunne withdrew due to illness.