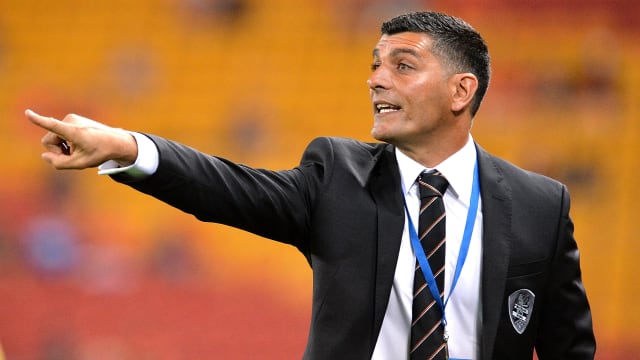 Before Brisbane Roar coach John Aloisi was trading barbs with Melbourne City, he was coaching them.

Even earlier than that, he was one of the club's foundation players and scored in his team's win in the first Melbourne derby.

None of that stopped him from mincing his words last time his Roar faced his old club.

"It's anti-football. We're trying to grow the game in this country and they go and play anti-football like that," Aloisi said after the teams played out a hotly contested 1-1 A-League draw in November.

In four games since, City have gone on to score 16 goals in four games, conceding just three, including a hugely entertaining Melbourne derby win last weekend.

Aloisi was not backing down when asked if he had changed his opinion in the lead up to Sunday's clash with Melbourne City in Brisbane.

Despite City's impressive turn of form, the club were rather poor up to and including that game - they won just two of their opening seven league games with John van 't Schip's job hanging in the balance as a result.

Anti-football might have been a tad harsh, but few would have described watching Melbourne City as a pleasure, particularly in that dire 1-1 draw with the Roar, in which City prioritised not losing.

Since, City have emerged as the A-League's form side, dispatching of sides with ease and swagger.

But, more than just a chance to make Aloisi eat his own words, Sunday's clash offers the chance to admire how far both club and coach have come.

To those that followed Aloisi's tenure at City, or Melbourne Heart as they were at the time, his cries of 'anti-football' may have caused a wry smile.

Aloisi might have encouraged nice football in his 19-month City reign, but his team's performances were - for the most part - terrible. He won just eight out of 39 games before being sacked.

What that number might have looked like had he been able to call on the services of Bruno Fornaroli - who has scored nine goals in 11 league games - instead of Michael Mifsud is anyone's guess.

Propelled forward by the multi-million dollar investment of the City Football Group (CFG), City's transformation from A-League strugglers to premiership contenders has perhaps not come as quickly or easily as expected, but the improved recruitment has gone a long way to aiding their cause.

City's fans still wait for the superstar power CFG's millions could surely acquire, but the likes of Ivan Franjic, Aaron Mooy and Fornaroli are a far cry from the dark days of Iain Ramsay, Marcel Meeuwis and Mifsud.

Meanwhile, Aloisi is delivering in Brisbane.

City's former coach has found his feet with his Roar side flying high in second in the A-League table, playing some pretty football along the way. His 17-month sabbatical from coaching has helped produce a more capable coach, seemingly much better at communicating his vision to his players.

It was never meant to be for Aloisi and City, but now, on their separate roads, they have started to fulfil their potential.