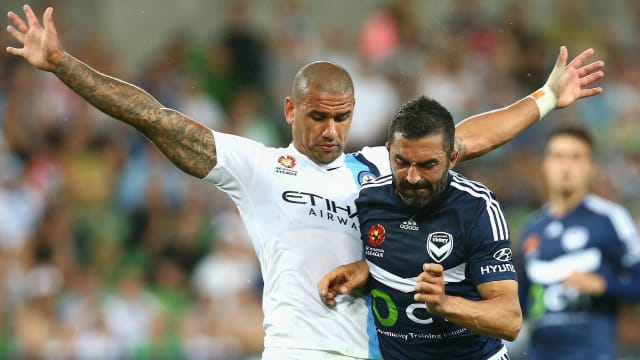 Some may be calling Melbourne City 'the Kings of Melbourne', but Melbourne Victory winger Fahid Ben Khalfallah insists his team remain top dog in Victoria's capital due to their bulging trophy cabinet.

It is the first time in Victory's history that they have lost four games in a row, while City look to be building a legitimate claim for the 2015-16 title.

But Ben Khalfallah believes nothing will be decided until this season's trophies are handed out.

And with Victory currently holding the A-League premiership and championship trophy and the impressive FFA Cup, the Tunisia international argues only one club can be considered 'Kings of Melbourne'.

"The kings of a city have the trophy," Ben Khalfallah said on Wednesday with a twinkle in his eye.

"But for people who want to see the trophies, they just have to go to the [club] office."

Victory's run of defeats leaves them fifth in the A-League table with 16 points from 11 matches, seven adrift of leaders Western Sydney Wanderers, while Brisbane Roar (22) and City (20) are sitting pretty in the top three.

But claims the title-holders are finished are incorrect, according to Victory's player of the year from 2014-15.

"When you're used to being the best team it's never easy to lose but it happens," Ben Khalfallah said.

"Sometimes you just have to accept it, and just get back to work and work hard.

"You know, when we played Western Sydney they played good; and the last game [City's] 'keeper [Thomas Sorensen] was amazing.

"He made good saves, he was on fire, but everything we did - especially the second half - was very good."