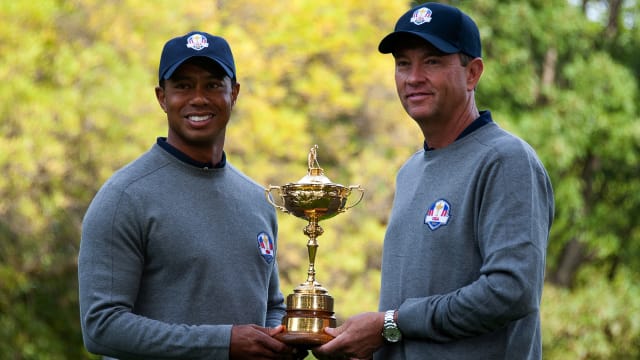 Tiger Woods insists he knows just how he can contribute as the United States' Ryder Cup vice-captain, but he remains hopeful of playing at the 2016 event.

The 14-time major champion remains sidelined due to injury, having had microdiscectomy surgery for the second time in September, before a follow-up procedure a month later.

Woods, who turns 40 later this month, has been appointed as a USA vice-captain for the Ryder Cup in September-October next year.

The veteran American said he knew what to expect in his role as Davis Love III's deputy.

"I've been on enough teams to understand what the role of the assistant captain is, what the captain's roles are and what your duties entail. I understand that part," Woods said on Tuesday.

"That's the beauty of being on teams for 20 years and serving as a player and as an advisor to some of the captains over the years on pairings and the things that we do behind the scenes that people don't know about.

"Certainly for me, I've come to a wonderful understanding of what my role may entail.

Love, 51, became the third-oldest winner in PGA Tour history when he claimed victory at the Wyndham Championship in August.

"It's pretty incredible, especially since he had his disc fused in his neck," Woods said of Love.

"For him to come back and to play as well as he has and not go on to the Champions Tour full-time, but still play out here with us and still hit the ball 300-plus yards. The guy can still move it.

"So to be able to see him do that post-surgery and seeing all the rehab that he's had to go through to get back out there and to get his game back up there and be able to win plus 50 is truly remarkable.