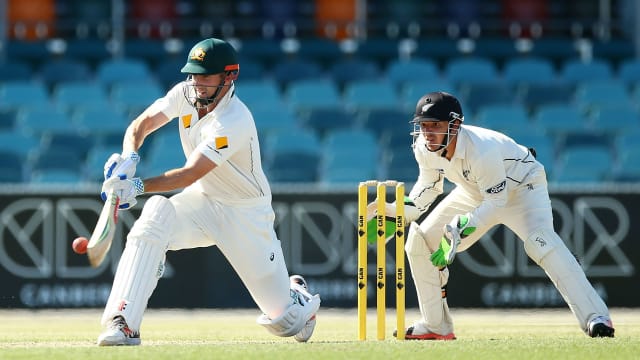 Darren Lehmann says Shaun Marsh has earned the right to replace the injured Usman Khawaja in the third Test against New Zealand.

Marsh was named in a 13-man squad for the final Test of the series in Adelaide next week after Khawaja suffered a hamstring injury, while James Pattinson and Stephen O'Keefe were also drafted in.

Michael Klinger and Glenn Maxwell were overlooked by the selectors despite being in the runs in the Sheffield Shield and Australia coach Lehmann has explained the decision to recall Marsh.

He said: "He was very close in the first Test selection. It was touch and go with Uzzy and Shaun Marsh. And he played really well for us last summer, he got 99 in Melbourne and a got a couple of 50s in Sydney.

"We thought he played quite well in the West Indies when he got his chance as well. He gets another chance to have a crack at Test cricket. He got some runs in Melbourne, which was pleasing to see. He gets first crack."

Lehmann also reiterated that 35-year-old Klinger did not miss out due to age not being on his side.

He added: "I think he's younger than (Adam) Voges isn't he? So age doesn't go against him. There's been a lot of speculation, he's made a lot of runs.

"At the end of the day Shaun Marsh is more recent in Test match cricket and has made a contribution, so that's the way we decided to go.

"Shaun's proven as in he's made some runs and contributions. He'll still want to prove himself again. I still remember that great hundred he got against South Africa at Centurion.

"So as a selection panel it was tight for all those guys when you've got to pick a batter."

Australia lead the series 1-0 heading into the first ever day-night Test, which starts at the Adelaide Oval next Friday.