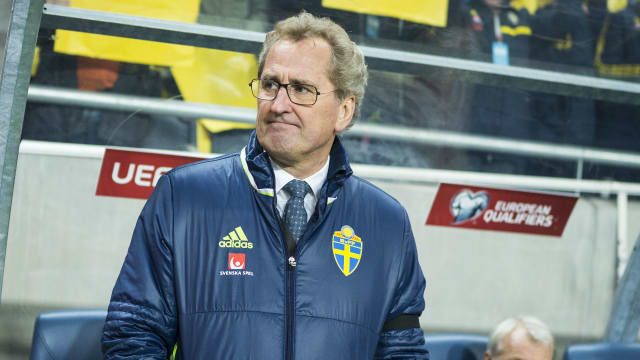 Sweden coach Erik Hamren has called in defensive reinforcements after the 2-1 victory over Denmark in Saturday's Euro 2016 play-off first leg left him with a defensive headache.

Emil Forsberg gave the hosts a deserved lead on the stroke of half-time at the Friends Arena and won a penalty early in the second period that captain Zlatan Ibrahimovic emphatically converted.

But Sweden had already been hit by centre-back Mikael Antonsson limping out of the action before they opened the scoring and their defence creaked badly during the closing stages as substitute Nicolai Jorgensen netted a potentially vital away goal for Denmark.

Antonsson will miss Tuesday's return in Copenhagen due to his groin problem, with Hamren bringing Besiktas' Alexander Milosevic and the uncapped Filip Helander of Verona into contention.

"It was a bit problematic that we lost Mikael Antonsson to a first-half injury - we had to change the game plan a bit and could not benefit from the fresh legs of a third sub in the last 15 minutes," Hamren explained.

"We played a high-pressure game, my players had to run a lot, and if you throw in the early substitution, I had a lot of tired players in the second half.

"Of course it would feel better if it had been 2-0 instead, but we have the tie in our hands now having won the first half."

Veteran Denmark boss Morten Olsen hopes the combination of Jorgensen's 80th-minute strike and a vocal home crowd at Telia Parken can give his team the edge.

"Tuesday will be another match altogether," he said.

"There is no doubt that the fantastic support I expect from our home crowd will be a tremendous help.

"It is up to us together with the crowd to make it happen. The one goal we scored makes all the difference. We're never content to lose, but we can be satisfied with 1-2."

Olsen will step down to end a 16-year reign at the end of Denmark's Euro 2016 campaign and the 66-year-old has fond memories to call upon as he aims to mastermind a performance that will extend his tenure until next year in France.

"It is pleasing that we get the opportunity to decide it all at home," he added.

"During my time as national coach, we have qualified for major tournaments at home three times. Doing it in front of your own crowd is always special."

One of those qualification successes carries particular significance for the Copenhagen faithful - a 1-0 victory in October 2009 that saw Denmark reach the 2010 World Cup at Sweden's expense.