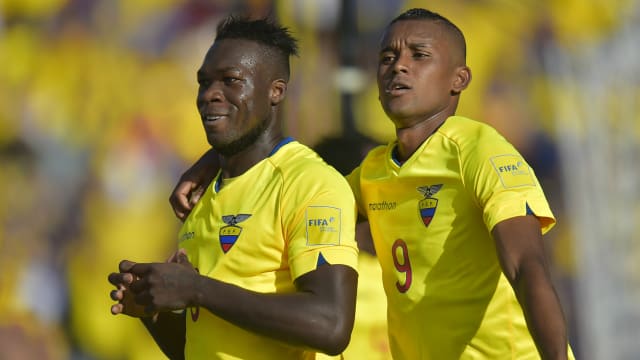 Fidel Martinez helped Ecuador to a 2-1 win over Uruguay in Quito as they maintained their perfect start to qualifying for the 2018 World Cup, while the visitors suffered their first defeat.

Gustavo Quinteros' men beat Argentina and Bolivia in their opening two fixtures and dominated proceedings before the break on Thursday, deservedly going a goal up via Felipe Caicedo.

Edinson Cavani then levelled the scoring in the second half but Martinez eventually made the difference when he tapped home a rebound.

The hosts got a number of chances to put the match to bed, but Fernando Muslera proved to be too much of an obstacle between the posts.

Miler Bolanos looked dangerous for Ecuador early on and had a chance to test the goalkeeper after 10 minutes, yet he fired wide from the edge of the box.

Abel Hernandez first threatened for the visitors in the 14th minute after a superb long ball from the back, but the attacker hesitated too long and allowed Gabriel Achilier to make a last-ditch block.

Ecuador grabbed the lead in the 23rd minute after a sublime team move. Christian Noboa set up Juan Carlos Paredes with an intelligent throughball, with the Watford man pulling it back for the onrushing Caicedo, who coolly slotted home from 10 yards out for his third goal in as many qualifiers.

Martinez should have doubled the hosts' lead just minutes later following a good cross from the left, yet the midfielder inexplicably headed wide from five yards out.

Carlos Sanchez got a fine chance to restore parity 10 minutes before the break after a quick counter-attack, but the midfielder did not get enough power on his shot, allowing goalkeeper Alexander Dominguez to push it wide for a corner.

Uruguay started the second half superbly and levelled in the 49th minute. Nicolas Lodeiro swung in a pin-point free kick for Cavani and the Paris Saint-Germain striker lost his marker before heading home from 10 yards out.

Cavani could have netted a second just minutes later after some fine work from Sanchez, but Dominguez pulled off a superb save to deny the prolific attacker.

Noboa got a great chance to restore Ecuador's lead 60 seconds later, only for Uruguay goalkeeper Muslera to show his class and keep the midfielder's precise header out.

The home side did go 2-1 up just short of the hour mark, though. Muslera did well to keep out Jefferson Montero's shot from the left wing, but Martinez was alert to tap home the rebound.

Miler Bolanos nearly made it three for Ecuador with a placed shot toward the far corner, but the Uruguay shot stopper leapt to his left to keep his side's chances alive.

Substitute Diego Rolan looked dangerous for Oscar Tabarez's side late on after a good run down the left, although he blasted his shot high and wide from just inside the area as it remained 2-1.