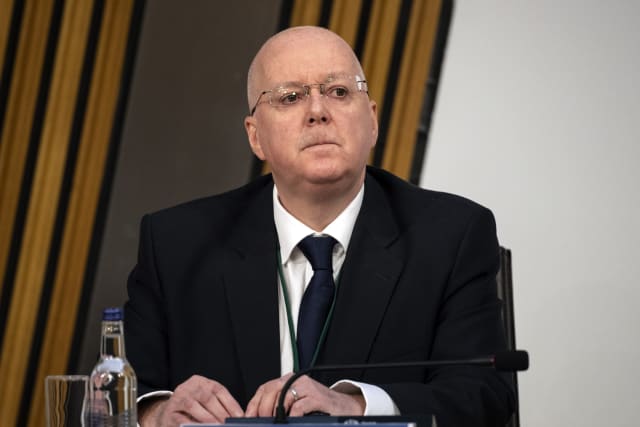 SNP chief executive Peter Murrell has responded to questions about contradictory evidence he gave to the inquiry into the Scottish Government’s botched investigation into allegations against Alex Salmond.

Mr Murrell, who is married to First Minister Nicola Sturgeon, was asked to clarify a number of details following his appearance before the Committee on the Scottish Government Handling of Harassment Complaints.

Convener Linda Fabiani had sought answers about a meeting between Ms Sturgeon and Mr Salmond at her Glasgow home on April 2 2018, where the First Minister was told by her predecessor of complaints of harassment made against him.

In his evidence, Mr Murrell initially said he did not know in advance about the meeting.

But later in the session, he contradicted himself by saying he was aware the previous day of Mr Salmond coming to the couple’s house – the first time he had visited since the 2017 general election campaign.

He also claimed in his written and oral evidence that he was not at home when the meeting took place, but again appeared to contradict himself by saying he arrived back “not long before the meeting ended”.

“My recollection is that Nicola mentioned to me on the Sunday evening that Mr Salmond would be visiting the next day, 2 April 2018,” he wrote, although he declined to answer a further question about whether he believed it related to government or SNP matters.

Questioned about his apparent assumption the meeting was about allegations involving Mr Salmond, Mr Murrell wrote: “I considered it possible due to the other individuals who were present in our home.”

Mr Murrell also only partially answered a question about his use of WhatsApp, with Ms Fabiani seeking to find out whether he has ever used the messaging app in the past, and if he had used it to discuss concerns about the former SNP leader.

In his response, Mr Murrell did not disclose whether he has ever used WhatsApp, but stated: “I confirm that I have not used WhatsApp on any matters related to concerns raised about the behaviour of Mr Salmond.”

He added he has never been involved in a group discussion on the platform where concerns were raised.

Mr Murrell repeatedly insisted he did not have WhatsApp and therefore had no knowledge of the group or messages being shared.

But The Scottish Sun subsequently discovered a WhatsApp account linked to his phone number, which the app said was “last seen” on November 22 2020.

In a letter to the committee after the story’s publication, Mr Murrell said he has WhatsApp on his phone but does not use it.

Scottish Conservative MSP Murdo Fraser, who is on the committee, said: “Peter Murrell is now suggesting he does use WhatsApp after claiming that he didn’t under oath, and the SNP vigorously insisted that was the truth.

“Time and again, the SNP’s story before the Salmond inquiry has chopped and changed.

“Clearly the entire Sturgeon-Murrell household turns forgetful whenever Alex Salmond’s name is brought up. The First Minister and SNP chief executive seem to be making it all up as they go along.

“The SNP are doing all they can to hide the truth about how £500,000 of taxpayers’ money was wasted and women were so badly let down.”

Majority across UK think Scotland will be independent within 10 years