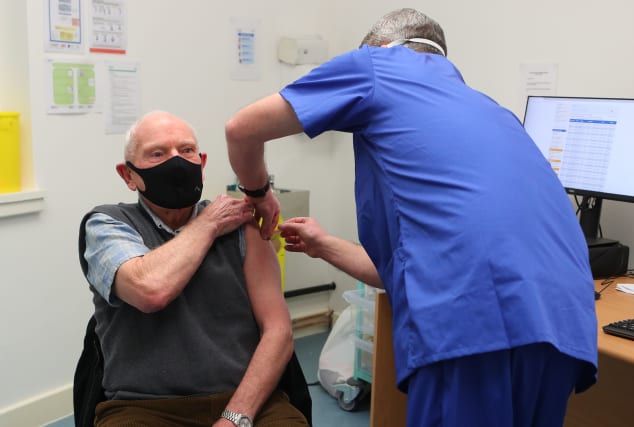 The director of a high street pharmacy has described joining the Covid-19 vaccination roll-out as one of the “biggest days of my career” as the site began delivering its first jabs.

Andrews Pharmacy in Macclesfield, Cheshire, is one of six pharmacies in England to begin administering doses as the Government seeks to expand the vaccination programme.

Speaking to the PA news agency on Thursday, director Andrew Hodgson, who has owned pharmacies in the area for more than 30 years, described the rush to set up a vaccination site as “a whirlwind”.

He gave the first dose of the Oxford/AstraZeneca jab to 82-year-old Robert Salt at 8am on Thursday morning.

“It is probably the biggest single day of my career,” Mr Hodgson said.

He added: “It’s been a bit of a whirlwind. We’ve set this up in three or four weeks from scratch.

“The whole team is very excited to be part of the roll-out.”

Mr Hodgson said he knew four generations of some of the families who use the pharmacy.

“I feel close to the people who are getting vaccinated and it is a personal experience for them,” he said.

Mr Salt said it was “wonderful” to have received his first dose, adding: “There was a little trepidation but it’s good, everything has gone fine today, apart from the weather.”

He said he felt relieved, but added he still had to be careful as his wife was still waiting for a vaccine appointment because she is under 80.

“The situation with the death rates going up the way they have done is pretty frightening.”

Natasha Eastwood, manager of Boots in Halfax, said she was “thrilled” the site had been selected as one of the first pharmacies to deliver the vaccine.

“Pharmacies like ours are at the very heart of their local community, offering a trusted team and location that our patients are familiar and comfortable with to be vaccinated against Covid-19,” she said.

Seb James, managing director Boots UK and Republic of Ireland, said additional sites would be opening in its Huddersfield and Gloucester branches in the coming weeks, with more stores under consideration.

“Pharmacies are extremely well placed to support the roll-out of this vaccine quickly and safely, and we stand ready to do much more.”

The Government aims to have vaccinated all people in the four most vulnerable groups by the middle of next month.

Those who are eligible for a vaccine will be contacted and invited to make an appointment through a new national booking service.

This gives them the option of having a vaccine at a pharmacy or in a GP-led vaccination centre.

By the end of the month more than 200 community chemists with capacity for 1,000 doses a week will be able to give vaccines, according to NHS England.

The pharmacies join the 200 hospitals, around 800 GP clinics and seven mass vaccination centres where jabs are already being handed out.

Labour leader Sir Keir Starmer urged ministers to go further and use England’s 11,500 pharmacies to deliver round-the-clock vaccinations by the end of next month.

The first six pharmacies were picked because they can deliver large volumes of the vaccine and allow for social distancing.