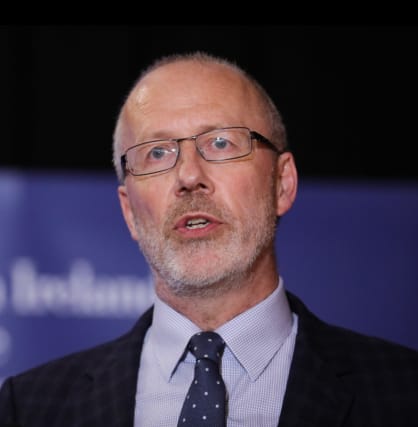 Northern Ireland’s chief scientific adviser is mounting a High Court bid to block a disciplinary investigation into allegations he failed to tell the family of a nine-year-old girl who died about “failings” in her treatment.

Claire Roberts died from hyponatraemia, which is linked to a shortage of sodium in the blood, at the Royal Hospital for Sick Children in Belfast on October 21 1996, shortly after she was admitted to hospital following several episodes of vomiting.

Professor Ian Young was asked to review the case in 2004 and provide an assessment on whether hyponatraemia contributed to Claire’s death.

A public inquiry investigating the deaths of Claire and four other children from the condition found Prof Young did not inform Claire’s parents – Alan and Jennifer Roberts – about failings in her care and gave “misleading” evidence to the original inquest into her death.

In a January 2018 report, inquiry chairman Mr Justice O’Hara also said Prof Young had “shifted from his initial independent role … to one of protecting the hospital and its doctors”.

A new inquest, which was ordered following the inquiry, concluded in June 2019 that Claire’s death “was caused by the treatment that she received in hospital”.

Prof Young referred himself to the General Medical Council (GMC) shortly after the inquiry’s report was published and the regulator initially decided not to waive its usual five-year time limit for fitness to practise proceedings.

But the GMC reversed its decision in January 2020, finding that it was “in the public interest” for the allegations against Prof Young to proceed to an investigation.

He argued the original decision that it was not in the public interest to waive the statutory time limit on investigations was “lawful and rational” and that the reversal of that decision was “inconsistent and unreasonable”.

With Mr and Mrs Roberts in attendance, Mr Kellar said: “Prof Young and those that represent him today are conscious that Mr and Mrs Roberts are here and are deeply sorry for their loss and the loss that the rest of their family has suffered.”

Peter Mant, representing the GMC, argued in written submissions: “The gravamen of the concerns about the claimant’s conduct, in short, was that upon being asked to review records relating to the death of Claire Roberts he immediately identified failings in fluid management that were likely to have contributed to her death but failed to inform the family or coroner of this fact, and instead provided misleading information that was intended to protect the hospital and its doctors.”

Mr Mant also thanked Mr and Mrs Roberts on behalf of the GMC “for the concerns that they have raised”.

He added that Prof Young was “a skilled and respected practitioner” but that the GMC was concerned “with the protection of the public” and maintaining public confidence in the medical profession – which he said was “at the heart of this case”.

Mr Mant also emphasised the GMC was not “making any findings” about Prof Young at this “early stage in the proceedings”.

The hearing before Mr Justice Holgate is due to conclude on Thursday afternoon and it is expected he will reserve his judgment to a later date.