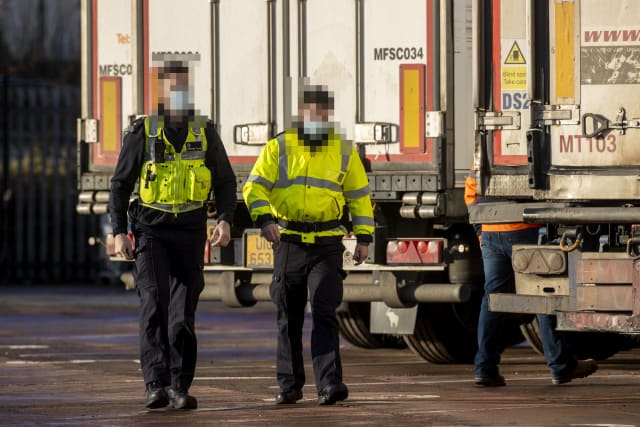 A Stormont minister who warned hospitals and schools risk running out of food when post-Brexit Irish Sea trade arrangements are fully implemented has been accused of scaremongering.

Hauliers said they were pressing for speedy action to avoid “cliff edge” paperwork change later this year but matters were improving.

DUP Agriculture Minister Edwin Poots envisaged a major crisis when a short-term grace period limiting the amount of red tape required to move retail food products from Great Britain to Northern Ireland runs out at the end of March.

Alliance Party MP Stephen Farry said: “This is scaremongering on steroids this morning from Edwin Poots.

“There’s no prospect that we’re going to see a complete collapse of the food supply in Northern Ireland, it’s just not going to happen.”

Once the exemption expires supermarkets will have to comply with more rigorous animal health certification processes under the terms of Brexit’s Northern Ireland Protocol.

Depleted supermarket shelves are already in evidence in Northern Ireland with the lighter-touch trade controls.

“That is a major crisis and I have raised this with (senior Cabinet minister) Michael Gove.”

A spokeswoman for Northern Ireland’s Department of Health said the Business Services Organisation (BSO) which supplies hospitals had signed food contracts will also allow for flexibility and substitution for example, a move from fresh to tinned or frozen for example should that be required.

She said: “BSO has confirmed that their suppliers do have a range of contingencies in place such as additional stockholding, use of alternative transit routes or moving to local supply.”

The department said it had not received any reports from any of the region’s health trusts flagging major issues related to food shortages or supply difficulties.

She added the BSO had worked with trust catering managers to agree “a core list of ambient products” that they have asked suppliers to reserve an additional four to six weeks of stock.

She said trusts also stood ready to change menus should that be required.

He said: “We need to get a solution in the coming days and weeks, not leaving it to March.

“The onus is on the Government to give confidence.”

He praised the work of his members to find clarity in the days after Brexit.

“That is one hurdle becoming a little bit lower for people.”

Under the terms of the Northern Ireland Protocol, the region has remained in the single market for goods.

Some products are prohibited from entering Northern Ireland at all under single market rules.

Sausages and other chilled meats, which are on that banned list, have been granted a six-month grace period to enable their import from GB to continue until June using temporary Export Health Certificates.