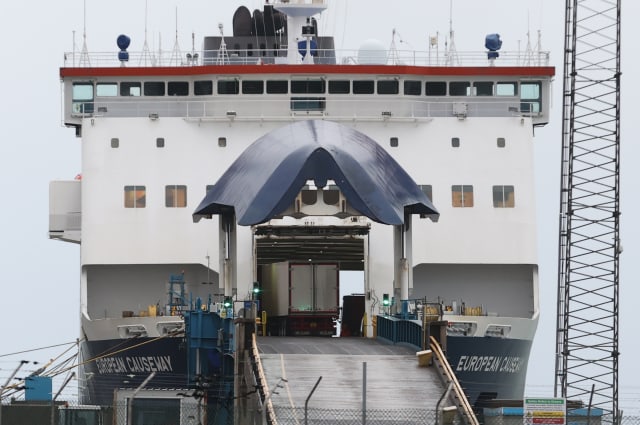 His critics accused him of scaremongering.

Stormont’s education department said: “At present we have no indication from our suppliers of disruption to their supply chain that would impact delivery of school meals.”

Once the three-month exemption period expires, supermarkets will have to comply with more rigorous animal health certification processes under the terms of Brexit’s Northern Ireland Protocol, which have caused disruption this month.

Depleted supermarket shelves are already in evidence in Northern Ireland with the lighter-touch trade controls.

“That is a major crisis and I have raised this with (senior Cabinet minister) Michael Gove.”

A spokeswoman for Northern Ireland’s Department of Health said the organisation which supplies hospitals had signed contracts allowing for flexibility and substitution, like a move from fresh to tinned or frozen, should that be required.

She said: “Business Services Organisation (BSO) has confirmed that their suppliers do have a range of contingencies in place such as additional stockholding, use of alternative transit routes or moving to local supply.”

The department has not received reports from any health trusts flagging major issues involving shortages or supply difficulties.

Seamus Leheny, who is Northern Ireland policy manager at Logistics UK and represents hauliers, said: “We need to get a solution in the coming days and weeks, not leaving it to March.

“The onus is on the Government to give confidence.”

He praised the work of his members to find clarity in the days after Brexit.

“That is one hurdle becoming a little bit lower for people.”

Supermarket Lidl said it was working with more than 50 suppliers in Northern Ireland and had been planning for Brexit for two years.

It added: “This local sourcing network and preparation has meant that we do not have any significant supply issues in relation to Brexit at present, and as such we’re confident our customers will be able to continue to shop all of their trusted Lidl products in our stores across the region.”

As part of the protocol, the region has remained in the EU single market for goods. That requires strict health checks on animal-based food products being shipped from Great Britain.