Domestic abuse victims urged to ‘Ask for Ani’ at pharmacies 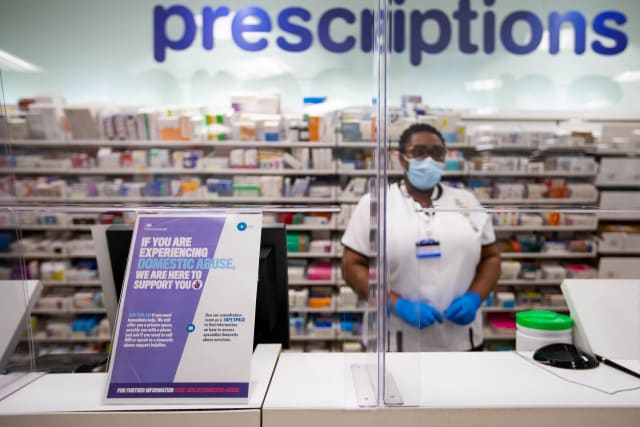 Victims of domestic abuse can now access support from thousands of pharmacies across the UK under a new scheme announced by the Government.

The Ask for Ani scheme allows those at risk or suffering from abuse to discreetly signal that they need help.

By asking for "Ani", a trained pharmacy worker will offer a private space to outline the support available, whether that is through the police or specialist support services.

In a Commons statement, Home Office minister Victoria Atkins said: "Protecting those at risk of abuse and exploitation remains a priority for this Government which is why I am so pleased that today I am able to announce the launch of a new codeword scheme for victims of domestic abuse called 'Ask for Ani'.

"From today, thousands of pharmacies across the UK will provide this service, enabling victims to seek help discreetly.

"Through a signal to a pharmacist, a victim will be provided with a safe space in the pharmacy and taken through the support available to them – whether that is a call to the police or a domestic abuse helpline service.

"The codeword scheme will offer a vital lifeline to all victims, ensuring they get help in a safe and discreet way."

She said: "Domestic abuse and community support services are currently planning for redundancies in March – quite unbelievable in the middle of a global pandemic and a national lockdown.

"The sector, the Labour Party, the domestic abuse and the victims' commissioner have all called repeatedly for sustainable funding for at least the next year.

"The staff being made redundant are the very people the minister needs for 'Ask for Ani' to have any chance of success."

Ms Atkins replied: "The latest figures that I have to hand on the funding that we have committed, both from the charitable funding that was committed in spring last year, as well as the Home Office's additional £2 million fund for the helpline services and web-based services, a total of just under £27 million has been allocated and indeed paid out of Government coffers."

Cyber-flashing is when a person is sent an unsolicited sexual image on their mobile device by a stranger nearby through AirDrop, a file-sharing function on iPhones. Victims are often targeted on public transport due to the technology's short range.

Ms Jones told MPs: "The scourge of cyber-flashing – where unwanted and unsolicited indecent photographs are distributed to mobile devices – needs to be made a criminal offence."

Responding, Ms Atkins said: "We are running a call for evidence at the moment on producing a new violence against women and girls strategy," adding: "I am very, very aware of the offence about which she speaks and I very much want those sorts of 21st-century online crimes to be dealt with."

Conservative Dehenna Davison (Bishop Auckland) raised concerns about the impact of Covid-19 on refuges, asking: "Can the minister assure me that those providing domestic abuse refuge services will be considered for the priority list in the next phase of the vaccine rollout to help ensure there are no gaps in support for domestic abuse victims because of Covid?"

Ms Atkins noted this was an "important" point, and said officials will draw up a priority list for the second phase of the vaccine process.

"I've very much taken her urging on board and we will, I'm sure in due course, consider her points and others in this regard," Ms Atkins added.

Ms Atkins replied: "I see this as very much part of our overall efforts to ensure that people understand what domestic abuse is, the many forms it can take, and how it is everyone's business."