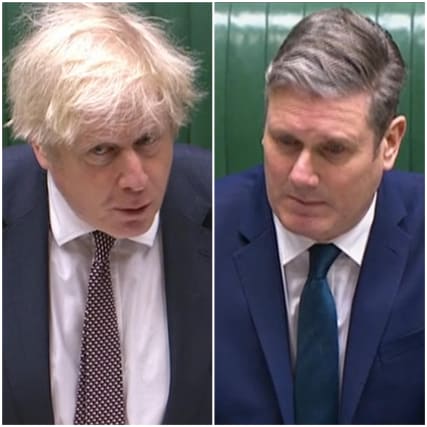 Boris Johnson was slapped down for accusing Sir Keir Starmer of being a hypocrite as the pair clashed in the Commons over Covid-19 and free school meals.

Speaker Sir Lindsay Hoyle intervened and forced Mr Johnson to withdraw the remark made at Prime Minister's Questions, advising both leaders to help in "tidying up how this Parliament behaves".

Labour leader Sir Keir used the session to accuse the Prime Minister of being "so slow to act" when Covid-19 infection rates surged in December, before raising much-criticised images shared on social media of food parcels offered to children as part of the free school meals scheme.

As the pair engaged in a second round of questioning on the meals, Sir Lindsay took exception to language used by the Prime Minister.

Asked earlier by Sir Keir if he would be happy for his children to be living on such meals, the Prime Minister told MPs: "I don't think anybody in this House is happy with the disgraceful images that we've seen of the food parcels that have been offered.

"They're appalling, they're an insult to the families that have received them."

The Labour leader quoted guidance published by the Department for Education, claiming this was similar to the meagre food supplies shown in photos online.

He said: "He blames others but this is on his watch. The truth is families come last under this Government, whether it's exams, free school meals or childcare."

He urged Mr Johnson to take down the guidance by the close of play on Wednesday, but the Prime Minister replied: "His words would be less hypocritical and absurd if it were not for the fact that the..."

At this point, Sir Lindsay intervened and said: "I don't believe anybody is a hypocrite in this chamber. I think we need to be a little bit careful about what we're saying to each other."

The Speaker advised both leaders: "There was a not truth earlier, and there was also comparisons to others.

"Please, let's keep the discipline in this chamber and the respect for each other. We're tidying up how this Parliament behaves and I certainly expect the leadership of both parties to ensure that takes place.

Mr Johnson replied: "I am delighted to be advised by you, Mr Speaker, and let me confine my criticism to the absurdity – which I hope is acceptable, Mr Speaker – of (Sir Keir) attacking us over free school meals when it was a Conservative government that instituted free school meals universal – not a Labour government."

Sir Lindsay later cut off Mr Johnson as he spoke about issues from the past rather than answering Sir Keir's question.

On Covid-19, Sir Keir said current restrictions are "not strong enough" and noted: "The last PMQs was on December 16. The Prime Minister told us then that we were seeing, in his words, a significant reduction in the virus.

"He told us then that there was no need for endless lockdowns and no need to change the rules about Christmas mixing.

"How did the Prime Minister get it so wrong and why was he so slow to act?"

The Prime Minister replied: "Of course, what (Sir Keir) fails to point out is that on December 18, two days later, the Government was informed of the spread of the new variant and the fact that it spreads roughly 50-70% faster than the old variant, and that is why it is indeed correct to say that the situation today is very troubling indeed.

"This is the toughest of times, but we can see the way forward."

Mr Johnson said he does not rule out imposing tougher Covid-19 restrictions if necessary.

He added: "We keep things under constant review and we will continue to do so.

"And certainly, if there is any need to toughen up restrictions, which I don't rule out, we will of course come to this House."

In Pictures: Fun in the snow as temperatures tumble

Covid vaccinations under way on the Isles of Scilly