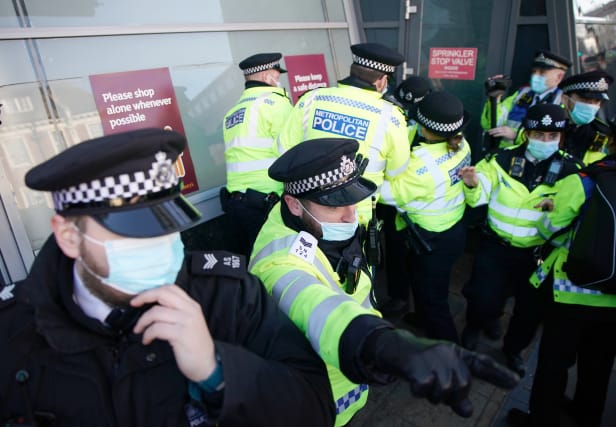 Metropolitan Police Commissioner Dame Cressida Dick said officers in London had issued more than 300 notices in the space of 24 hours for “flagrant” violations of the regulations.

“That is quite a lot. I think it will have an impact and it will encourage more people to recognise that we are in a health crisis,” she told BBC Radio 4’s Today programme.

“We are at a terrible time. For the next few weeks, we must absolutely do our best to reduce the spread of the virus.”

Crime and policing minister Kit Malthouse said the Government was closely monitoring the numbers of cases before deciding whether further measures were needed for England.

“We are at a very, very perilous stage in the progress of this virus through our country,” he told Sky News.

“Whether there are going to be greater restrictions or not very much depends on the numbers. We are tracking the infection rate.

“We are all, frankly, on tenterhooks to see how the impact of the restrictions that came in on Boxing Day will impact on numbers, particularly in London and the South East.”

Amid concern that activity levels were higher than during the first lockdown in April, Mr Malthouse said officers would be adopting a new “high-profile” approach to enforcing the rules.

He said that it could include stopping people to ask what they were doing outside their homes – in what he described as a “significant change” in the British policing model.

“It’s certainly the case that the police are going to be very high profile,” he told Times Radio.

“It’s certainly part of police’s job to stop people and enquire as to the reasons why they’re outside their house.

“It is a very significant change and it’s a challenge for British policing that relies on a model of consent.”

Dame Cressida said while the “vast majority” of the public were complying with the rules, her force had had to break up protests and house parties held in clear violation of the regulations.

She said her officers would also be prepared to assist supermarket staff if customers became “obstructive and aggressive” when they were told they must wear a face covering.

Her warning came as Morrisons said customers who refused to wear a mask without a medical exemption will be told to leave its stores, while Sainsbury’s said its security staff would “challenge” shoppers who were not wearing masks or entering stores in groups.

Her warning came after Health Secretary Matt Hancock said on Monday that the NHS was under “very significant pressure” and that the public should reduce all social contact that was “not absolutely strictly necessary” in a bid to cut cases.

The latest NHS England data showed there were 32,070 Covid-19 patients in English hospitals as of 8am on Monday.

The figure is up 20% compared with last week, and up 81% since Christmas Day.

A further 529 people died within 28 days of testing positive for coronavirus as of Monday, taking the UK total to 81,960 – though separate figures show there have now been 97,000 deaths involving Covid-19 in the UK.

Mr Hancock told a Downing Street press conference: “The NHS, more than ever before, needs everybody to be doing something right now – and that something is to follow the rules.”

Elsewhere in the UK, Wales’s health minister Vaughan Gething said people should consider keeping their masks on in public places if they are “out and about”.

And in Scotland, the coronavirus detection rate was said to be the worst of the UK nations, according to a report from former prime minister Gordon Brown’s think tank.