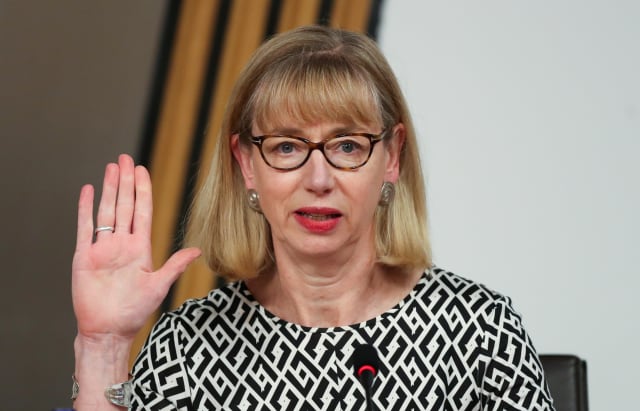 Scotland’s most senior civil servant has defended the decision to pass sexual harassment complaints about Alex Salmond to the Crown Office against the wishes of the women involved.

Permanent Secretary Leslie Evans also repeatedly refused to say when the Scottish Government was told it would probably lose a legal challenge brought by the former first minister.

In her third appearance before Holyrood’s Committee on the Scottish Government Handling of Harassment Complaints, Ms Evans sought to explain the “tough decision” to pass on details of the allegations despite some complainants not wanting to go down a criminal route.

She revealed she was “really affected” when reading the women’s accounts of alleged sexual harassment by the former SNP leader and said the decision to investigate and then report the allegations to the Crown Office was “entirely evidence-led”.

Asked about the decision to pass details of the complaints to the Crown Office despite the apparent reluctance of complainers to go to the police, Ms Evans said she followed the “considerable advice” she was given.

“It was not an easy decision to make at all, I was weighing up two competing, difficult and very, very important sets of circumstances and I didn’t take the decision lightly,” Ms Evans said.

She added: “It was decided that we had to balance the legal advice given to me – as the person who was going to take this decision – and the careful consideration of the views of the complainants.

“This was very carefully weighed up by me.

“I was particularly concerned and took some time to find out if we could possibly allay some of the complainers’ concerns about a potential referral to the police.

Ms Evans continued: “I was very mindful and, to be honest remain very mindful, about the impact of them and their loss of privacy and their concerns and anxieties.

“Nevertheless – as the procedure sets out – there may be occasions on which those have to be weighed up against the potential of criminality and criminal proceedings.”

The committee is examining the Scottish Government’s botched investigation of multiple complaints about Mr Salmond in the wake of the Me Too movement.

Mr Salmond successfully challenged the lawfulness of the investigation and was awarded a £512,250 payout by Edinburgh’s Court of Session.

The case was eventually conceded by the government in January 2019, with Judge Lord Pentland ruling the investigation was unlawful and “tainted by apparent bias” because of prior contact between investigating officer Judith Mackinnon and some of the women who would later come forward with complaints.

Mr Salmond was acquitted of sexually assaulting nine women while he was first minister, with a jury at Edinburgh High Court returning 12 not guilty and one not proven verdicts.

During Tuesday’s evidence session, Ms Evans said she knew about the prior contact when Ms Mackinnon was appointed to the role but claimed that it was “in keeping with the spirit and intent” of the government’s policy.

The harassment complaints policy, which remains in place, states that the investigating officer “will have had no prior involvement with any aspect of the matter being raised”.

Ms Evans said: “While I was aware that there had been some contact I was not aware of it and not of the nature that was subsequently brought to bear in some of the documents that were presented.”

Redacted and paraphrased documents released by the government reveal that senior, external lawyers threatened to resign if the case was not conceded to Mr Salmond at some point after they were made aware of the prior contact between the investigating officer and complainants.

Ms Evans insisted that the decision to continue to defend the case despite evidence of prior contact was based on “composite advice” from inside and outwith the Scottish Government.

“It would have been remiss for me to only have listened to one voice; at every stage, the legal advice that I was provided was complete and thorough and from a variety of sources and that is quite right and quite appropriate,” Ms Evans said.

She added: “I listened carefully to all legal advice from all sources at every stage – every single stage – of the procedure, not just during the judicial review.

“But I had a really careful and really important role and responsibilities to undertake.”