Man jailed on terror charge over weapons including crossbow 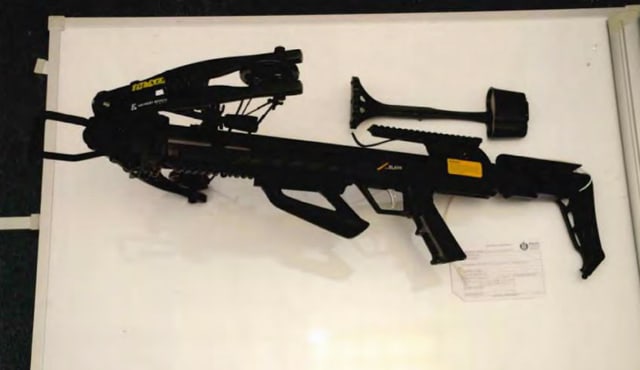 A man found guilty of a charge under the Terrorism Act of possessing weapons has been jailed for a decade with an extended period on licence “to protect the public” from him.

Gabrielle Friel was found guilty of possessing the weapons at various locations in Edinburgh in 2019, including his home, a social work centre and a hospital, in circumstances which gave rise to the “reasonable suspicion that possessing them was for a purpose connected with terrorism”.

The 22-year-old appeared via video link at the High Court in Edinburgh on Tuesday, where Lord Beckett imposed the 10-year sentence – backdated to August 19 2019 – with a five-year extension subject to licence.

In sentencing Friel, Lord Beckett warned him: “You have not previously served a prison sentence and it will be difficult for you.”

He added: “You are still a relatively young man as you were when you committed this crime, and I take account of that and its implications.

“I observe in passing that whether or not it is a cause or symptom of illness, spending 12 hours and more each day surfing the internet has been extremely damaging for you.

“Whilst you have explained the difficulties which you have felt in your family life, education and social life, they offer no possible justification for what you did which went well beyond the realms of fantasy given the items which you accumulated and the circumstances in which you did so.

“Your possession of these articles, your online activity, what you told a social worker and psychiatrist and parts of your evidence demonstrate how far you had come and your purpose and motivation in acquiring these items.

“It is necessary to punish you, to seek to deter you and others from acquiring and possessing articles for the purposes of terrorism and to protect the public from you.

“Given the nature of this crime, your previous conviction and its circumstances about which I heard evidence in your trial last month, and what I have learned from the reports, I do not consider that the normal period of licence would be sufficient to protect the public from serious harm from you.”

Under part 4 of the Counter Terrorism Act 2008, Friel will be subject to notification requirements for 30 years, and a serious crime prevention order submitted by the Crown was also issued for five years which will commence when he is released.

Friel only spoke once during the sentencing, to clarify his nationality as Indonesian.

His lawyer Brian Gilfedder described him as a “disturbed young man haunted by thoughts of violence” and that he “wants to die and doesn’t want to be here”.

Friel was found guilty of possessing a crossbow, a scope, crossbow arrows, a machete and a ballistic vest between June 1 and August 16 2019.

A second charge that he prepared for terrorist acts by researching spree killings, particularly those connected with incels – people who are involuntarily celibate – was found not proven after a five-day trial at the court in December.

Friel denied both charges and gave evidence in his own defence during the case, saying mass shooting was a “fantasy” for him, and he “felt for” incel mass murderer Elliot Rodger, but denied being an incel and described killers as “evil”.

Rodger killed six people in California in 2014 before taking his own life.

Mr Gilfedder said his client maintained the possession of weapons “had nothing to do with terrorism” and its “sole purpose was death by extended suicide… creating public discord and provoking an armed response by police resulting in his death”.

He added that Friel’s parents “have supported him throughout this episode and previous episodes” and said they were “loving parents also worried sick about his behaviour and attitude”.

The trial heard Friel also claimed he wanted to commit “suicide by cop” when he stabbed a police officer at Edinburgh College’s Granton campus in November 2017.

Friel was sentenced to 300 hours of community service after pleading guilty at a hearing in June 2018 to the stabbing, which endangered the officer’s life.

Jennifer Harrower, procurator fiscal for specialist casework, said: “Gabrielle Friel is a dangerous individual who posed a threat, not only to himself, but to the public, as shown by the items found in his flat.

“(The Crown Office and Procurator Fiscal Service) has a duty to protect the people of Scotland from harm and are committed to doing everything we can to bring those who threaten the safety of the public to justice.

“This includes using every tool available to us, including serious crime prevention orders.

“These are a powerful tool that can be tailored to each individual and are designed to restrict their ability to reoffend.

“In Friel’s case, it is hoped it will help protect both him and others upon his eventual release.”