Almost 45,000 fines handed out for Covid-19 breaches across UK 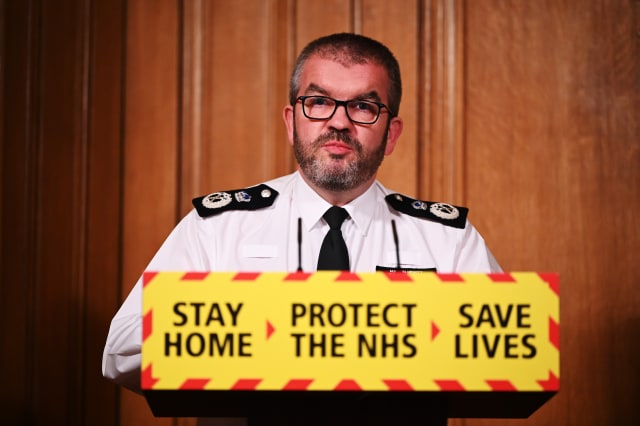 Almost 45,000 fines have been issued to people across the UK for breaching Covid-19 laws, a senior police chief has said.

National Police Chiefs’ Council chairman (NPCC) Martin Hewitt said officers will not “waste time” trying to reason with people who have “no regard” for the safety of others.

He outlined a series of recent examples of “irresponsible behaviour” that had been penalised – including a boat party in Hertfordshire with more than 40 people, and a minibus full of people from different households travelling from Cheltenham into Wales for a walk.

It comes after data published by the NPCC on Friday showed 32,329 fixed penalty notices (FPNs) were issued by forces in England and Wales between March 27 and December 21 last year.

It is currently unclear what time period the 45,000 figure covers.

Speaking at the Downing Street press conference on Tuesday, Mr Hewitt said: “Organising parties or other large gatherings is dangerous, selfish and totally irresponsible in light of the current threat that we face. Organisers will be fined. But so too will the people who choose to attend.

“Not wearing a face covering on a bus or a train is dangerous. It risks the lives of other travellers including those critical workers who must continue to use public transport to do their important work.

“So on those systems, unless you are exempt, you can expect a fine.”

Mr Hewitt also acknowledged that mistakes would be made by police forces in enforcing the coronavirus rules.

He said “hundreds of thousands” of interactions had taken place between officers and the public.

Mr Hewitt told the press conference: “Sometimes mistakes will be made, but we always have looked at those, we have looked at them quickly, we have dealt with the members of the public concerned and we have said when we have got something wrong.

“That’s been a really important part of how we have dealt with this really difficult 10 months and, undoubtedly for some time to come.”