‘Appalling’ levels of infant mortality at mother and baby homes 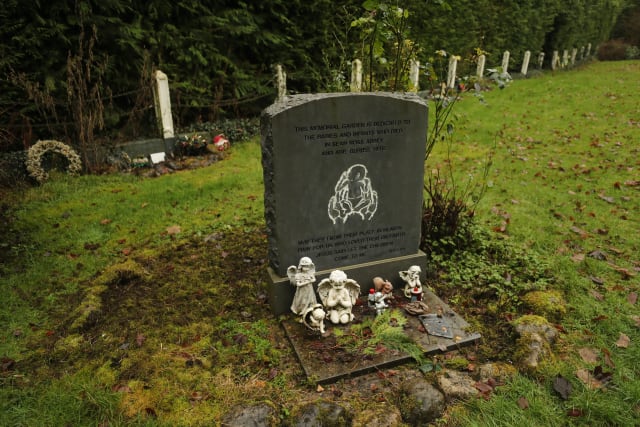 An investigation has found “appalling” levels of infant mortality at mother and baby homes in Ireland.

The institutions were for women and girls who became pregnant outside marriage and many were run by Catholic nuns.

Almost 9,000 children died, approximately 15% of all youngsters who were in the institutions, the investigation found.

A report from an independent commission of investigation said: “In the years before 1960, mother and baby homes did not save the lives of ‘illegitimate’ children; in fact, they appear to have significantly reduced their prospects of survival.”

The proportion of women admitted to such homes in Ireland was probably the highest in the world in the 20th century, the Commission of Investigation into Mother and Baby Homes said, and many of the unmarried women were denigrated.

Its review said: “The high rate of infant mortality raised serious questions about mother and baby homes: the large size, unqualified staff and inadequate staffing, poor management, and the limitations on the local and national authorities’ willingness and capacity to implement reforms.”

It added that infant mortality fell sharply in the late 1940s.

“This may have removed the motivation for major reforms, which would have involved fraught negotiations with religious congregations and members of the Catholic hierarchy,” it said.

It added: “There is no evidence of public concern being expressed about conditions in mother and baby homes or about the appalling mortality among the children born in these homes, even though many of the facts were in the public domain.”

The homes were largely run by religious institutions and overseen by the Government.

The Taoiseach said: “It holds up a mirror to aspects of our past, which are painful and difficult, and from the present-day perspective, often hard to comprehend.”

There were about 56,000 unmarried mothers and 57,000 children in the 18 mother and baby homes and county homes investigated by the commission.

Many of the orphanages were run by Catholic nuns.

“We had a completely warped attitude to sexuality and intimacy. Young mothers and their sons and daughters paid a terrible price for that dysfunction.”

He will issue a full State apology to survivors on Wednesday in the Irish Parliament, the Dail.

The commission made 53 recommendations covering compensation to survivors, memorialisation and creating a central repository of the records of institutions and adoption societies so that information can be obtained from one place.

Some pregnancies were the result of rape; some women had mental health problems, some had an intellectual disability, the Government-ordered review said.

Women were admitted to mother and baby homes and county homes because they failed to secure the support of their family and the father of their child, the report noted.

The commission said they had no other option.

“Their lives were blighted by pregnancy outside marriage, and the responses of the father of their child, their immediate families and the wider community,” it added.

The Daughters of Charity order of nuns, which staffed one of the homes, said many of their sisters dedicated their lives to supporting these women.

“We so wish and deeply regret that we could not have done more to ease the burden and suffering carried by these women, mostly alone, as they dealt with both a major crisis in their lives and totally unjustifiable rejection,” it said.

Niall Boylan, now a DJ on Classic Hits FM, was born in the St Patrick’s Mother and Baby Home in Dublin.

He claimed the report was an insult.

He said: “The report said that this was a societal issue, but it doesn’t apportion blame to the Catholic Church. Who moulded society?

“The Catholic church had moulded the way people think. They are solely responsible and the State paid them to do it.