The latest on the UK’s Covid vaccination programme 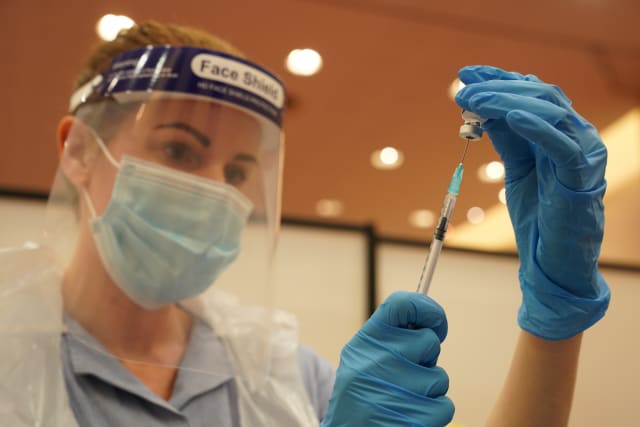 The push to vaccinate the UK against Covid-19 reaches a new level on Monday as several mass injection centres open amid dire warnings in all four nations over high levels of infection and struggling hospital systems.

In what some commentators are calling the arrival of the cavalry in the fight against the coronavirus, here is a look at the new developments on the vaccination front.

Health Secretary Matt Hancock will today set out the Government’s new plan for delivering vaccines, which it is hailing as the “keystone of our exit out of the pandemic”.

A rollout strategy will also be detailed in Wales. In Scotland, the Oxford/AstraZeneca jab is available in more than 1,000 locations from Monday. Northern Ireland already has the Pfizer/BioNTech and the Oxford-AstraZeneca vaccines being distributed.

– What vaccines have been approved in the UK?

While hundreds of vaccines are under development worldwide, three have been approved for Britain. First came the Pfizer/NioNTech jab, then the Oxford-AstraZeneca, and last week, the third, made by US firm Moderna.

All up, the UK has ordered around 370 million doses of vaccines.

The Pfizer-BioNTech and the Moderna treatments are called RNA vaccines (for ribonucleic acid). They inject part of the genetic code of the Covid-19 coronavirus directly into people’s cells – encased in tiny fat droplets to protect it – in order to spark the body’s immune system into learning what the virus is, and responding. Simply put, it starts making part of the virus inside the body, the immune system then learns to identify the virus, then spring into action to defeat it, to stop Covid-19 developing.

The UK-developed Oxford-AstraZeneca jab is a viral vector vaccine. With these, scientists can add the RNA genetic code of the Covid-19 coronavirus to the genetic material of another virus – making a viral vector – which is then used in the vaccine. Once in people’s cells, this, like RNA vaccines, triggers the immune system to recognise the Covid-19 virus and do its work to defeat it.

Piggy-backing on another virus might cause people to worry about contracting some other form of infection. Scientists have avoided this risk by using harmless, genetically altered, viral vectors which cannot cause diseases.

While both RNA and viral vector are double-dose vaccines, the big plus with the latter is it can be stored at a regular fridge temperature, making delivery far easier (especially in poorer countries).

– How effective are they?

Trials have shown the Moderna vaccine to be 94.5% effective, and the Pfizer-BioNTech jab to be 95% effective.

The Oxford-AstraZeneca vaccine has been shown to be around 70% effective, but again, its major advantage is ease of distribution.

– Who is first in line for the jabs?

The Government set out its priority groups on December 30. Top of the list are nine different categories, based mostly on age, referred to as Phase 1 of the programme. The list starts with residents in care homes for older adults plus their carers.

Third comes all people over 75, then people over 70 plus anyone classed as extremely vulnerable due to other clinical conditions, down to the ninth grouping of people aged from 50-54.

This top nine was determined from data showing the number of people in each category who would need to be vaccinated to prevent one death (the more people, the higher up the list).

Phase 2 deals with people whose jobs put them at risk to Covid exposure. The Government says this could include first responders, the military, people employed in the justice system, teachers, transport workers and public servants who are critical to the fight against the pandemic.

Ashton Gate football stadium in Bristol, Epsom racecourse in Surrey, the Excel Centre where London’s Nightingale hospital is based, Newcastle’s Centre for Life, the Manchester Tennis and Football Centre, Robertson House in Stevenage and Birmingham’s Millennium Point will offer jabs to people aged 80 and older, along with health and care staff.

These centres will be joined later this week by hundreds more GP-led and hospital services along with the first pharmacy-led pilot sites, taking the total of sites to around 1,200.

The Government has set a target of having 15 million people vaccinated by mid-February.