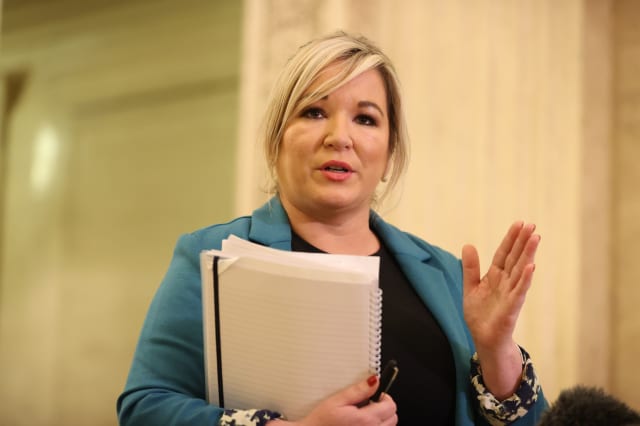 Ms O’Neill said that while Northern Ireland had now passed the peak of new infections in the current Covid-19 wave, the associated surge in hospital admissions was still to come.

Her stark assessments came after health chiefs warned that the number of Covid-19 patients being treated in hospital could double by the third week in January.

Northern Ireland’s hospital network came under intense pressure at the weekend with two health trusts being forced to issue appeals to off duty staff to report in to work.

The situation was the most extreme in the Southern Trust area, where Covid-19 infection rates are currently highest in Northern Ireland.

Over the weekend, Craigavon Area Hospital and Daisy Hill Hospital in Newry were in danger of being swamped with new cases.

Off duty staff coming in to help treat the influx of patients helped avoid the declaration of a major incident.

Enniskillen’s South West Acute hospital in the Western Trust area also asked off duty staff to report into work in case there was a need to start receiving inpatients from the Southern Trust.

Patient diversions to Enniskillen were ultimately not required.

“I think the developments over the weekend whilst they were predicted are still very stark and very alarming,” said Ms O’Neill.

“We are at the extreme of the pandemic right now, this is the worst situation that we have been in from the very onset.

“I think we’re now witnessing this scenario which was predicted to be the worst case scenario way back in the early part of March last year but now it’s a real lived experience.”

Ms O’Neill told BBC Radio Ulster that she could not rule out a potential extension of the region’s current lockdown which is due to end in the first week of February. She said all options remained on the table.

“All of the predictions indicate that we’ve probably reached the peak in this wave of the number of new cases,” she said.

“But we certainly haven’t reached the peak yet in terms of the pressure on the health service. And the next number of weeks is going to be a huge, huge effort from all those people who work in the health service on the frontline.”

“If you look at the number of positive cases whilst they are still too high they have gone down from the peak of what you will recall was over 2,000 cases and yesterday I think we had 1,112 positive cases,” she told Radio Ulster.

“So while the cases are still high, the assessment is that we are past the peak of cases but of course then there is a lag then in terms of hospital admissions and that is very concerning to see that we are now at 703 Covid inpatients in our hospitals.”

A further 17 Covid-19 linked deaths were confirmed in Northern Ireland on Sunday.