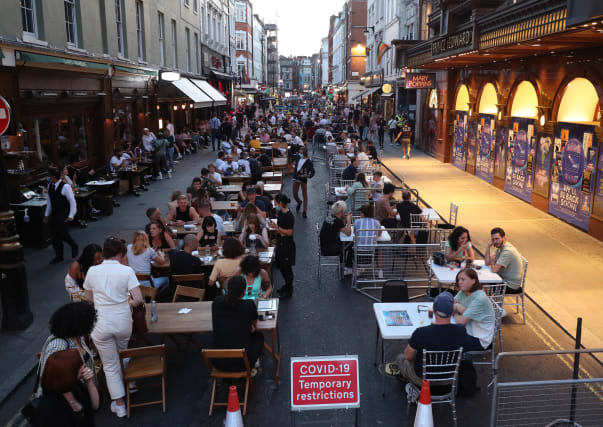 Robert Jenrick has said he would like to see al fresco dining continue in 2021 to help keep hospitality businesses afloat throughout the pandemic.

The Communities Secretary told the Commons he hoped the pedestrianisation of streets to allow for more outdoor eating areas could be put “on a permanent footing” to help support small businesses and local high streets.

His comments came after the move to allow restaurants to serve al fresco in formerly bustling areas such as Soho in London was considered a lifeline to many businesses last summer.

Responding to Conservative Flick Drummond (Meon Valley), Mr Jenrick told the Commons: “I’d also drive (Mrs Drummond) to look at the planning reforms that we’ve brought forward because it isn’t simply about more public investment, we also want to support entrepreneurs, small businesses, people and small builders through the right to regenerate, the changes to the class orders and the new licensing arrangements that I would like to see be put on a permanent footing – like the ability to have markets, to keep marquees outside pubs into the future and to have more tables and chairs outdoors so the al fresco dining that we saw in the summer can be replicated this year.”

Meanwhile, shadow housing secretary Thangam Debbonaire said Mr Jenrick had not kept his promise that no-one would lose their home due to the pandemic.

Ms Debbonaire said: “Millions of hard-working people are excluded from every Covid scheme… the Government’s own stats show that hundreds of thousands have fallen behind on rent and a loophole in the new evictions rules means that anyone with more than six months of arrears is at risk of eviction. So when… the Secretary of State said that no-one should lose their home because of coronavirus, did the Secretary of State mean that or not?”

Minister for rough sleeping and housing Kelly Tolhurst replied: “I regret that (she) does not recognise the unprecedented steps that this Government has taken in relation to an unprecedented global pandemic to support renters.”

She added: “Our data shows that our measures to protect renters are working… stats show no (repossessions) recorded between April and September. We have put a ban on evictions, six months’ notice period, extended buy to let mortgage holidays, £700 million to support rough sleepers and those at risk of homelessness.”

Ms Tolhurst continued: “We know people are experiencing hardship in these times and this Government will continue to review and take the necessary action to make sure people in this country are protected.”