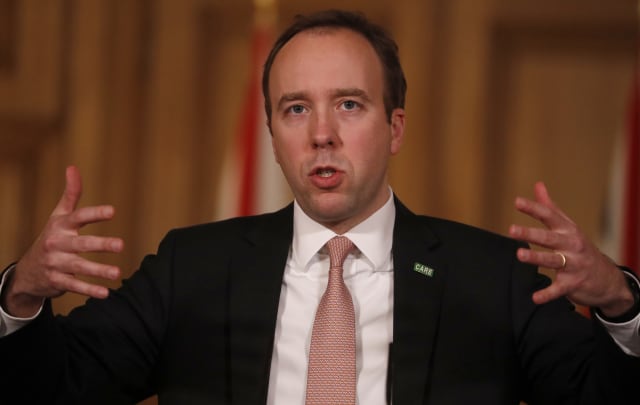 Health Secretary Matt Hancock has categorically ruled out an end to the support bubble system in the face of rising coronavirus infection rates, allaying the fears of many that the policy was about to be scrapped.

Support and childcare bubbles allow adults living alone or single parents living with children under the age of 18 to join up with one other household, essentially becoming one single household.

Introduced in June, the system allowed people in one bubble to visit each other indoors, ignore the two-metre rule and stay overnight – as if they were all living under the same roof.

It means elderly people living alone can bubble up with an adult son or daughter, also allowing them to spend time with any grandchildren in the home and share childcare responsibilities.

It was rumoured support bubbles could be scrapped following comments by vaccines minister Nadhim Zahawi on Monday morning that all measures are under review.

But speaking at a Downing Street press briefing on Monday afternoon, Mr Hancock said he wanted to be “crystal clear” that the policy would remain.

“I can rule out removing the bubbles that we have in place – the childcare bubbles (and) the support bubbles are very important and we’re going to keep them,” he said.

“I know how important they are to people and they are an important part of the system that we have got to support people whilst also having these tough measures that are necessary.”

But Mr Hancock warned the public to stick with the people they chose to form a bubble with.

“You can’t keep moving bubbles, that’s very important. Somebody in your bubble essentially becomes effectively part of your household.

“It is important that people stick to the same bubble but the bubbles policy will stay.”

He added: “I want to be absolutely crystal clear about that.”

Speaking to BBC Radio 4’s Today programme, Mr Zahawi had said he was anxious the public were not following rules such as wearing masks or adhering to measures such as one-way systems set up to limit mixing.

Mr Zahawi added: “We don’t want to use tougher measures, the lockdown is tough, schools are shut, but it is important to remember this virus loves social interactions.”

Mr Hancock echoed his concerns, warning people not to socialise with other people under the guise of exercising.

“And we have been seeing large groups and that is not acceptable. And you should be two metres apart from the other person.

“If there are too many people breaking this rule then we are going to have to look at it.”

He added: “But I don’t want to do that because, for many people, being able to go for a walk with a friend, that often is their only social contact.