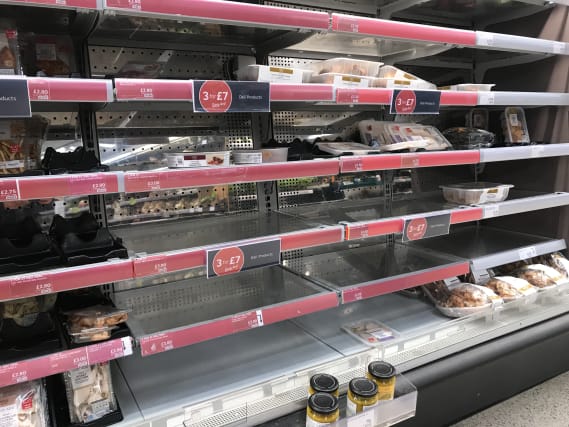 Hauliers are spending tens of thousands of pounds bringing empty lorries to Northern Ireland, an industry spokesman has said.

Seamus Leheny, of Logistics NI, said exports of goods from Northern Ireland to Great Britain are doing well, however less is coming back across the Irish Sea as suppliers are faced with new customs demands.

There is a varied picture at shops in Northern Ireland, with empty shelves evident in some parts of some supermarkets – while others appear well stocked.

Mr Leheny said one told him they had spent £24,000 bringing empty lorries from Great Britain due to less produce being transported to Northern Ireland.

“Exports are doing well. NI produce is hitting the shelves of supermarkets across GB,” he told the PA news agency.

“However that’s creating a problem because hundreds of lorries are leaving NI every day for England, but because the suppliers in GB have these formalities to comply with to send their goods to Northern Ireland, a lot of them have either suspended or are delaying loads.

“So then they are having to ship loads back to Northern Ireland empty at their own expense, that’s a terrible hit for any haulier, it’s burning money, because there are driver wages, fuel and ferry costs.

“One haulier last week told me they spent £24,000 shipping empty trailers back to Northern Ireland, trailers that would normally be coming back laden.

“A hauliers business model is based on having a full load going out and full load coming back.”

Retailers are faced with more paperwork and checks following the end of the Brexit transition period.

“The work of a haulier is to have the right data in the right format at the right time, and a lot of the time, that isn’t happening so it means loads can’t leave GB and are delayed,” he said.

“The suppliers to Northern Ireland really need to get on top of this quickly. Some hauliers are managing better than others, a lot of that comes down to either their own preparation or the commodities and who the shippers are. Some commodities are more complicated to move than others.”

He has called for action from the special joint committee of UK and EU officials which oversee the Northern Ireland Protocol.

“We need to see that committee take some pragmatic solutions, some could be short term, but it would alleviate pressures for industry and give us the breathing space to look at more long term solutions, but we need time to develop those,” he said.

“What is unique about Northern Ireland is that our high street is comprised of the same retailers as across the rest of the UK and that is why the nature of our supply chain is very unique, entering the single market. We’re the only part of the EU single market which is part o the UK high street and that has to be recognised.”