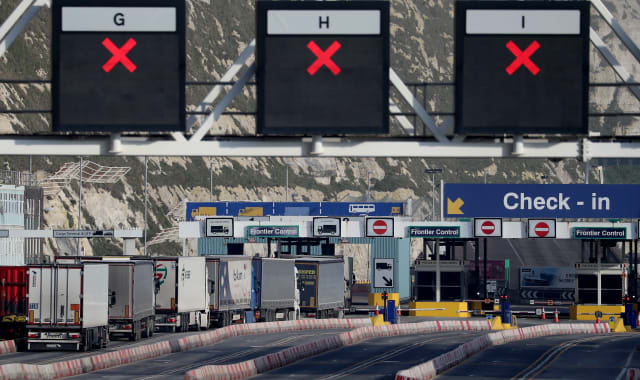 Hauliers are warning that freight delays will escalate this week as more firms attempt to send lorries abroad.

Rod McKenzie, director of policy and public affairs at the Road Haulage Association (RHA), told the PA news agency he is “very worried” about the impact of post-Brexit customs checks when cross-Channel trips reaching normal levels by Wednesday.

He told the PA news agency: “It’s got to happen.

“Traders have been holding off sending lorries into harm’s way, because they wanted to see what other people’s problems were so they could learn from them.

“But you can’t keep doing that forever, you’ve got to trade. There will come a nail-biting moment when people bite the bullet and send the truck.”

Mr McKenzie said most delays suffered by hauliers since the end of the Brexit transition period have been due to drivers not having a coronavirus test needed to enter France, or issues with customs paperwork.

“We’re already seeing substantial problems on the Irish crossing, and as volumes build on the short straits this week, then we’ll really see a test of everything.”

Mr McKenzie added that Government IT systems are “under strain” and “not working as well as they should”.

He said: “I’ve spent a massive amount of time on Brexit preparations yet we’re still getting hugely delayed.

“What concerns me is how much the drivers can take before they throw in the towel and say ‘we’re not doing it anymore’.”

The firm delivers fresh meat carcasses to continental Europe via Dover and Folkestone.

Journeys which had previously been completed over two days are now taking up to five days, he explained.

“Our problems start when we arrive in France.

“We have to wait for the French authorities to give the green light for us to continue our journey.

“Two trucks on Saturday spent 16 hours waiting for that to happen.”

He went on: “We just don’t have time for these delays. Fresh meat carcasses devalue by the hour.

“I’ve been doing this for 20 years and last week was the worst week I’ve ever had doing this job.”

He said the company is “losing an absolute fortune on a daily basis”.

He went on: “France is not going to do the UK any favours. I can’t see a light at the end of the tunnel at the moment.

Thousands of lorries were backed up in Kent in the days before Christmas when France blocked trade across the Channel due to a mutant variant of coronavirus spreading through the UK.