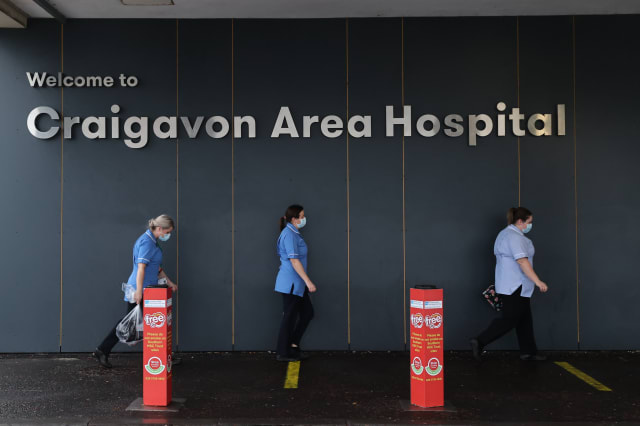 Arlene Foster has defended the pre-Christmas easing of coronavirus restrictions in Northern Ireland as hospitals struggle to deal with surging admission numbers.

Stormont’s first minister insisted one of the new variants of Covid-19 was a key factor in rocketing case numbers witnessed at the turn of the year.

Mrs Foster also suggested that the powersharing executive may have to consider introducing another curfew, similar to that deployed in the week over new year, if the current strict lockdown measures fail to suppress the virus sufficiently.

Hospitals in Northern Ireland are under increasing pressure, with health chiefs warning that the worst is yet to come.

The chief executives of the six health service trusts have predicted that current record high coronavirus inpatient numbers could double by the third week in January.

Earlier on Monday, Stormont’s chief scientific adviser Professor Ian Young said while the new variant had “some impact” on spiralling new year infection rates, he indicated the easing of restrictions pre-Christmas was the primary factor.

“This is the consequence of the two weeks of pre-Christmas relaxation,” he told the BBC.

At a press conference in Co Fermanagh on Monday afternoon, Mrs Foster was asked whether the Stormont executive had to shoulder the blame for the situation hospitals were now facing.

“The executive unanimously decided on our Christmas plan, as indeed did people in the Republic of Ireland, and indeed right across the United Kingdom recognising the special place that Christmas has for a lot of us,” she said.

“However, we do know that the virus does mutate and we’re seeing that now and that’s why we have to take action when we see that happening.”

Health experts in Northern Ireland believe the peak of new infections has now passed, with daily numbers of cases beginning to fall in recent days.

However, the lag period between infections and subsequent hospitalisations means the full impact of the high case numbers will not been experienced in the hospitals until later in January.

A further 16 Covid-19 linked deaths and 759 new cases of the virus were confirmed in Northern Ireland on Monday.

She warned that the pressure on hospitals would continue to mount in the days and weeks ahead.

“We will have this pressure on the system I think now for a couple of weeks and we have to ready ourselves for that,” said the DUP leader.

“I think the developments over the weekend whilst they were predicted are still very stark and very alarming,” the Sinn Fein vice president told the BBC.

“We are at the extreme of the pandemic right now, this is the worst situation that we have been in from the very onset.

“I think we’re now witnessing this scenario which was predicted to be the worst case scenario way back in the early part of March last year but now it’s a real lived experience.”

The Stormont executive is due to meet to discuss the situation on Tuesday and Thursday.

Mrs Foster said she did not think Tuesday’s meeting would see further discussion on the controversy around plans for a February 27 academic selection test for primary schoolchildren transferring to secondary schools.

Northern Ireland’s hospital network came under intense pressure at the weekend, with two health trusts being forced to issue appeals to off duty staff to report in to work.

The situation was the most extreme in the Southern Trust area, where Covid-19 infection rates are currently highest in Northern Ireland.

Over the weekend, Craigavon Area Hospital and Daisy Hill Hospital in Newry were in danger of being swamped with new cases.

Off duty staff coming in to help treat the influx of patients helped avoid the declaration of a major incident.

Enniskillen’s South West Acute hospital in the Western Trust area also asked off duty staff to report into work in case there was a need to start receiving inpatients from the Southern Trust.

Asked whether the executive could introduce even tighter restrictions, Mrs Foster suggested further curfews may be considered.

Mrs Foster added: “There’s very limited ways that we can do anything further, apart from looking maybe again at curfews and doing something along those lines.”

Ms O’Neill said she could not rule out a potential extension of the region’s current lockdown, which is due to end in the first week of February. She said all options remained on the table.